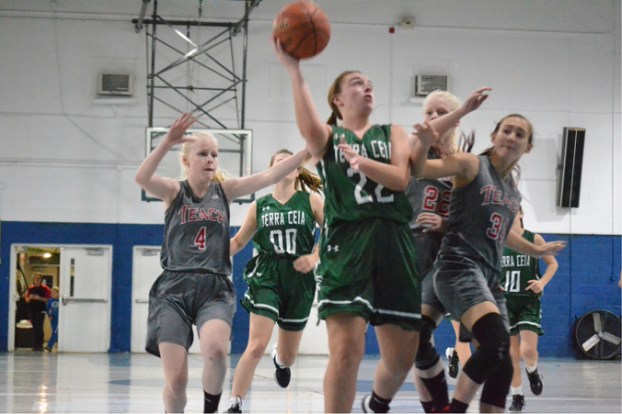 The Trailblazers of Eastern Christian Homeschool hosted Terra Ceia in their home opener Tuesday evening at the old Washington High School gym. TEACH jumped out to an early lead, but the Lady Knights clawed their way back to win, 44-30.

Early on, TEACH’s Sarah Sottile found some open lanes for layups to get out to an 8-0 lead. They took advantage of a couple of Lady Knights turnovers and converted them into points throughout the first quarter, but Terra Ceia got back on track later in the first half.

Hensley Jordan came off the bench, picked up a couple of steals and six first-half points to vault her team back in the lead.

Terra Ceia starting point guard Carly James found her rhythm and facilitated well in the final three quarters of the game, along with some stifling defense.

Senior guard Emily Roscoe hit a big 3-pointer in the second half to extend the Terra Ceia lead to six points in the third quarter, and the Lady Knights never looked back.

Senior forward Madison Perry collected quite a few rebounds and a couple of put-back buckets in the game, but she said there are still a few things her team needs to work on going forward. “It sometimes takes us that first quarter for us to get situated, but then we usually find our groove,” Perry said after the game.

“We just have to keep our heads up, get in our spots and not turn the ball over,” Carly James said. “If we can keep doing that, we’ll be fine.”

“I’m proud of them, considering it’s early in the season and we beat Community Christian in Wilson last week. We’ve got a young team, but they look alright so far,” Scott James said. “We got a lot to fix, but if we can continue to iron those out like we did tonight we’ll be good, but we still have a lot to work on.”

It was an encouraging first half for TEACH, as they got out to an early lead but couldn’t quite hang on to it. They battled late in the second half, but couldn’t cut the deficit into striking distance.

“We could’ve played a lot better than we did tonight,” TEACH head coach John Lampkins said after the game. “We got away from playing team basketball a little bit to playing one-on-one. If we can clean that up, we’re going to be a pretty good basketball team. We’re going to have to simplify the offense a little bit and get the ball to our scorers.”

Terra Ceia’s next game will be at home against Cape Hatteras on Saturday afternoon, while TEACH will travel to Unity Christian this afternoon for their second game of the season.