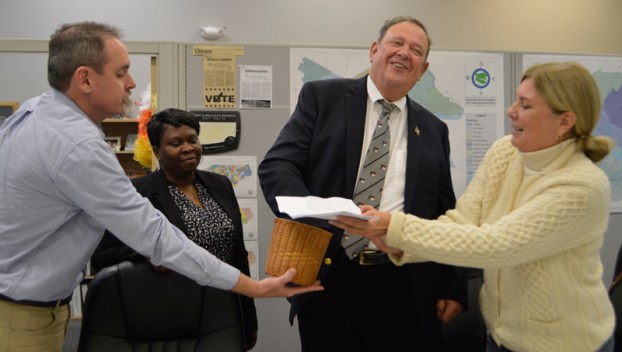 LUCK OF THE DRAW: Members of the Beaufort County Board of Elections participate in a random drawing to determine the winner of the Washington City Council race. Pictured, left to right, are Jason Williams, Watsi Sutton, Tom Payne and Ranee Singleton. (Matt Debnam/Daily News)

After a marathon day of canvassing and two recounts, the Washington City Council election was settled by drawing a name from a basket. William Pitt will serve another term on the council, after the luck of the draw favored him over Roland Wyman.

Pitt and Wyman were neck and neck at the Beaufort County Board of Elections on Friday afternoon after a count of absentee ballots during canvassing gave each candidate a total of 621 votes, tied for the fifth seat on the city’s council.

What followed was an automatic machine recount of every ballot cast in that race. One by one, Board of Elections staff fed 1,530 ballots through voting machines to verify the totals.

During the machine recount, a poorly-marked ballot led to a hand-eye recount of all the ballots from Washington Ward 1. Because of that ballot, it appeared that Wyman’s actual vote total was 620, but the manual recount confirmed the original numbers, maintaining the tie.

To ensure accurate results and a fair election, the Board of Elections then decided to continue recounting all Washington ballots by hand. With the two candidates watching the process, Board members sorted the ballots from each precinct into four piles — those marked exclusively for Wyman or Pitt, those marked for both and those marked for neither.

A discrepancy in the Washington One Stop totals, however, which appeared to place Pitt ahead by one vote, led to a painstaking recount for the board, and ended with a verified tie. Both Pitt and Wyman said they were satisfied with the recount process. 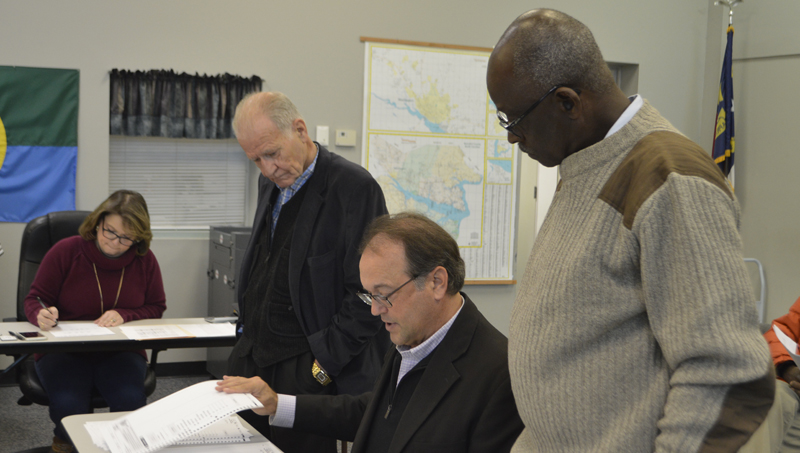 FAIR PROCESS: Washington City Council candidates Roland Wyman and William Pitt observe as Board of Election Member John Tate calls out ballots from Washington Ward 1 during a hand-eye recount. A total of 1,530 ballots were recounted by machine and then by hand Friday to certify the tie between the two candidates. (Matt Debnam/Daily News)

To settle the election, both candidates agreed to have their names placed in a basket. Board of Elections Director Kellie Hopkins then placed 10 slips of paper in the basket, five for Pitt and five for Wyman, with Board Chairman Tom Payne drawing the winner. Board member Watsi Sutton then read the name, declaring Pitt the victor.

“This has been nerve-wracking,” Pitt said after his name was drawn. “Thank you and thank God for what he has done. I think we need to tell everybody that one vote does matter.”

Pitt also thanked his wife for being steadfast by his side and all those who have been supporting and praying for him during the election. He will soon travel to Texas to represent Washington and North Carolina at the National League of Cities conference.

“I love my town,” Pitt said. “We’re not perfect, but we need to invite everybody to play the game. These next two years, I’m going to try to be the most inclusive councilman that Washington has ever seen.”

Wyman, meanwhile, said that he will continue to focus his efforts on serving the community through his roles in Washington (noon) Rotary and on the board of directors for Arts of the Pamlico.

“This was an amazing process,” Wyman said. “I feel privileged to have been able to witness the whole thing start to finish. I’m perfectly happy with the outcome. I think the city ends up with a good city council. With the candidates we had, the city just about couldn’t loose.” 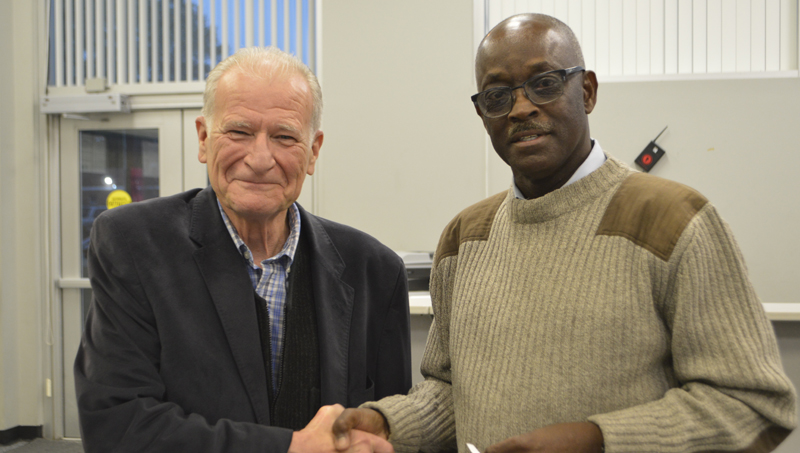 PHOTO FINISH: With 621 votes each after canvassing and two recounts, Washington City Council candidates William Pitt and Roland Wyman agreed to have their names drawn from a basket to determine the fifth-place winner in the race. Pitt won the draw. (Matt Debnam/Daily News)

For Hopkins, Friday’s tied election and selection of winner by lot was the first she has seen in her 21 years at the Beaufort County Board of Elections.

“Like Mr. Pitt said, I think voters need to take away from this that one vote does count and low turnout can affect these things drastically,” Hopkins said. “Recounts are great for the transparency of the process. Candidates and people that are involved in the recount become very familiar with the process. It backs up how our machines work and validates the process.”

With the addition of absentee and provisional ballots, close races in Belhaven, Pantego and Washington Park are no longer eligible for recounts.

Beneath the lapping waves of the Pamlico River, a hidden history tells the story of the shoreline from days gone... read more