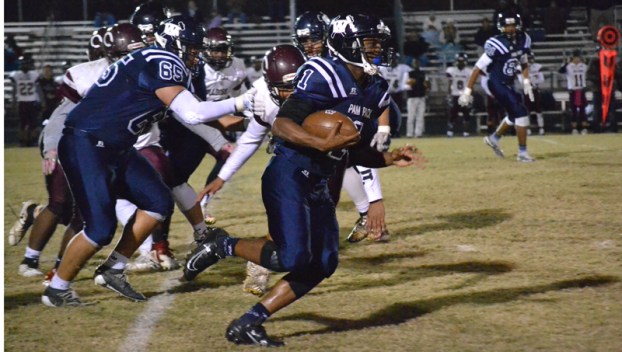 CENTURY MARK: In Thursday night’s 35-20 win for the Pam Pack, Jaden Hambric edged the 100-yard mark with three rushing scores. Washington is going to need that kind of production again on Friday night at against Salisbury. (Mitchell Thomas / Daily News)

Up next for Beaufort County football playoff teams

The second-round of the NCHSAA state playoffs are on the slate, and two Beaufort County teams are still alive in their respective brackets. The Northside Panthers knocked off KIPP Pride, 42-12, Thursday night to continue their season, while the Pam Pack survived and advanced with a 35-20 win over Nash Central.

Each team has a tough test in the second round. The Panthers will travel to Gaston to take on Northampton County (8-3, 5-1) on Friday night. Washington will host their second consecutive playoff game against Salisbury (10-2, 7-2).

UNC baseball commit Vance Honeycutt has been a force to deal with in his first season under center at Salisbury. Honeycutt has an arm. He’s capable of making the downfield throws, and using his feet. He’s had multiple 100-plus yard running games on the season and proven to be a winner. He has led the Hornets to a 10-win season with their 45-7 victory over Mt. Pleasant on Friday evening in the first round. Honeycutt had two rushing touchdowns from 44-yards and 51-yards out, a 12-yard touchdowns pass and two interceptions.

However, according to Salisbury head coach Brian Hinson said in a quote, “Our defense has been our calling card all season,” according to the Salisbury Post.

The Hornets have collected five-shutout victories this season. They’ve given up a total of 97 points on the season through 12 games, averaging only 8.03 points surrendered per game.

It’s worth noting, 3-seed Oak Grove (10-2, 8-1) the Conference Champions of the Central Carolina 2A Conference, was bounced by 14-seed North Davidson last Friday night in 43-7 fashion. Salisbury finished second in the conference after losing to Oak Grove 35-19 in the regular season.

It will be a tough matchup for the Pam Pack, and they must avoid a slow start at all costs to win the football game. On too many occasions this season, Washington has come out flat, forcing them selves to play from behind.

The Panthers will have to go on the road for a 4th-seed, 5th-seed matchup. Northampton is a primarily running team. On the season, they have used 17 different backs to total the 3,304 yards on the ground. The Jaguars are led in rushing by seniors Semaj Mitchell (821 yards, 8 TD’s) and Na’Jae Newsom (817 yards, 10 TD’s).

The Jaguars have only played in one game that was decided by a single-possession, which was a 20-14 victory over 3-7 Roanoke Rapids in August. Northampton doesn’t play in the strongest conference, but they have decisively defeated all the teams in the bottom half, with their only conference loss to the Tar Roanoke Conference Champions, North Edgecombe.

Northampton is 3-2 in games played out of conference. All three wins came against teams with three wins or less.

The Jaguars have only played three games against teams with a positive record, and they’ve lost all three (North Edgecombe, Hertford County, Washington County).

Friday night is very intriguing. With their backs against the wall in win-or-go-home situations, how will Washington and Northside fare?