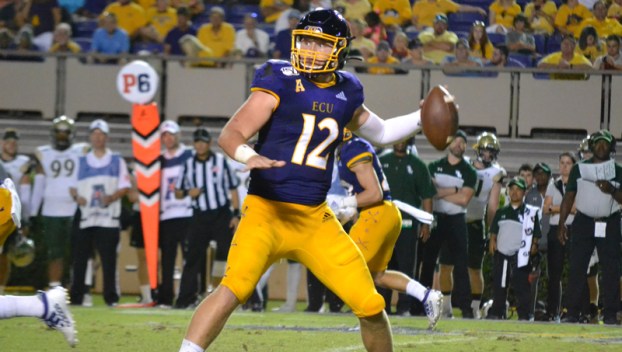 How ECU football can finish season on high note

The East Carolina Pirates have shown promise, regardless of what their current 3-7 record might say about them. There has been numerous times throughout the course of the season, that it has really clicked for this Pirates team, but they haven’t been able to notch the statement win. With a trip to the University of Connecticut on deck, and a home matchup against Tulsa to cap off the season, there’s a good possibility ECU can finish the season 5-7 with a step in the right direction.

It’s been three years since the Pirates have won more than three games in a season. In 2015, ECU went 5-7, and they haven’t been to a bowl game since 2014. They boasted an 8-5 record with a postseason loss to Florida in the Birmingham Bowl, 28-20.

A bowl game is out of the question for the Pirates this season, as they would’ve had to win seven games on the season to reach bowl eligibility. Their win over William & Mary isn’t considered a Division-I victory that counts towards qualifying for a bowl.

So, the Pirates must make these last two games count. UCONN (2-8, 0-6) is exiting the American Athletic Conference following the 2019 season, and they have not been very competitive against teams within the conference this year.

This should be a win for a Pirates team that has found an offensive rhythm. ECU, with the emergence of C.J. Johnson, Tyler Snead and Blake Proehl, have put up massive yard totals and points the last few weeks.

Snead set an ECU school record with 19 receptions for 240 yards and three touchdowns in a 59-51 loss to Southern Methodist University in Dallas, Texas two weeks ago. Johnson had a couple of breakout games this season, and Proehl has been a deep threat, with multiple 50-plus yard touchdown receptions.

Holton Ahlers has been impressive this year. He has completed 203-of-344 (59%) of his passes for 2,705 yards and 17 touchdowns with eight interceptions.

Ahlers has carried the ball 96 times for 302 yards and five scores as well. The D.H. Conley product has found himself at home in this offense towards the back half of the season, and has two more years to improve.

In their last four contests, the Pirates are averaging 35.5 points per game. I expect ECU to reach that total, plus a couple of touchdowns against the lowly Huskies on Saturday afternoon in Hartford.

The Pirates will play their season finale against Tulsa the Saturday after thanksgiving, at noon. That should be another game the Pirates have a good opportunity to win, and get on track to heading into the 2020 campaign.