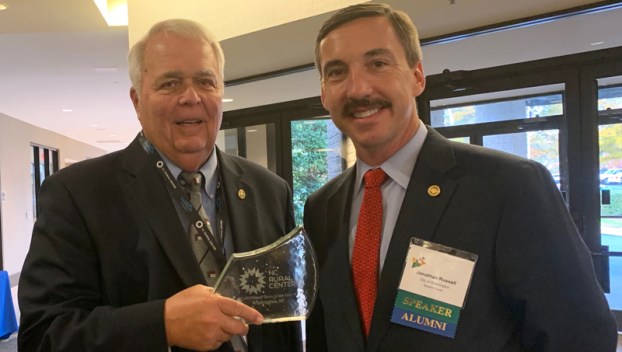 Washington has a reason to celebrate after being named the North Carolina Rural Center’s 2019 Small Town of the Year.

The award recognizes one town in North Carolina each year that has embraced the values of citizen engagement, diversity and strong partnerships to help the community move forward through economic development.

During the award presentation, N.C. Rural Center board member Lige Dautridge cited a few items that made Washington stand out, including efforts to create inclusive community events, positive economic development and mitigation plans to make the city more resilient during major storms.

“The City of Washington is a welcoming community,” said Dautridge, quoting one of the nominations. “Everyone, including residents and the governing board, is contributing to the city’s efforts of creating and maintaining an inclusive environment. They are doing all that they can to attract young professionals, investors and tourists.”

Washington City Manager Jonathan Russell said multiple people in the community nominated the city for the award. To receive the award over other deserving municipalities is a sign that Washington is doing something right, he said.

“It’s great news for the community,” Russell said. “I think it just illustrates all the hard work the (Washington City) Council, community partners and the citizen base have put into the city. They’ve really taken ownership of improving the city overall.”

The award came during the annual N.C. Rural Assembly in Raleigh on Thursday, which was attended by more than 400 municipal officials from across the state. The yearly conference focuses on the unique issues and challenges faced by rural communities in North Carolina, an extension of the N.C. Rural Center’s mission.

Among the topics discussed during this year’s meeting were economic development, affordable housing, broadband infrastructure and possible funding streams for government projects.

Washington Mayor Mac Hodges, Councilman Richard Brooks, Councilwoman Virginia Finnerty and a number of municipal staff members also attended the conference on behalf of the city, as did Arts of the Pamlico Director Debra Torrence. For Hodges, the award represents the hard work of many people and organizations, all of whom are working to move the city in a positive direction.

“Washington’s got a lot going on,” Hodges said. “Everybody’s pulling the same way and getting a lot done. There’s just a whole lot of positive things. You’ve probably got more than 100 people trying to pull this town forward, and its coming, inch by inch.”

For more information on the N.C. Rural Center and its mission, visit www.ncruralcenter.org.

For 24 years, the Washington Area Historic Foundation has added a touch of history to Christmas, and Christmas trees. WAHF... read more