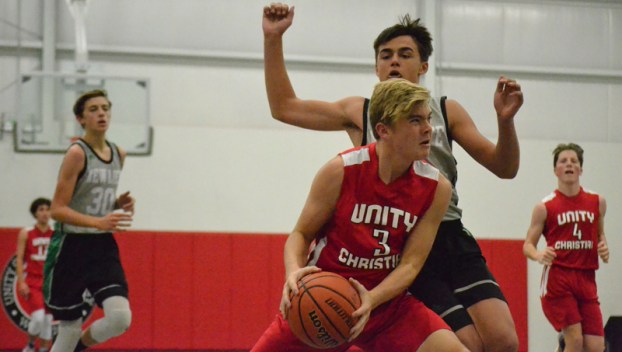 CONTACT: Unity Christian Academy’s sophomore guard Jeff Harris prepares to go up for the shot with a defender draped all over him. Harris scored 24 points on the evening for a team-high. (MItchell Thomas / Daily News)

CHOCOWINITY — A 25-0 first quarter run sparked the Unity Christian Academy Warriors to a 61-22 victory over New Life Academy on Thursday night in Chocowinity.

After the jayvee boys team came away victorious, the Warriors varsity followed suit with a very hot start.

The Warriors’ full-court press really gave the Bobcats some trouble. Colby Case led the charge in steals with six, and it set up the Warriors for a ton of easy lay-ups in the first half. Case also added 17 points on the evening.

“We were just playing really aggressive defense early on which led to steals. Colby and I both had (quite a few),” Harris said. “We got plenty of fast break opportunities, and defense wins championships. We have some tough opponents on our schedule. We just have to learn how to stay focused. Our team likes to have fun, but we’re going to have to get serious to get some big time wins.”

Freshman Lucas Cutler got some first quarter minutes after putting up points in bunches during the jayvee contest. Cutler scored 13 first quarter points for the varsity squad before exiting the game. 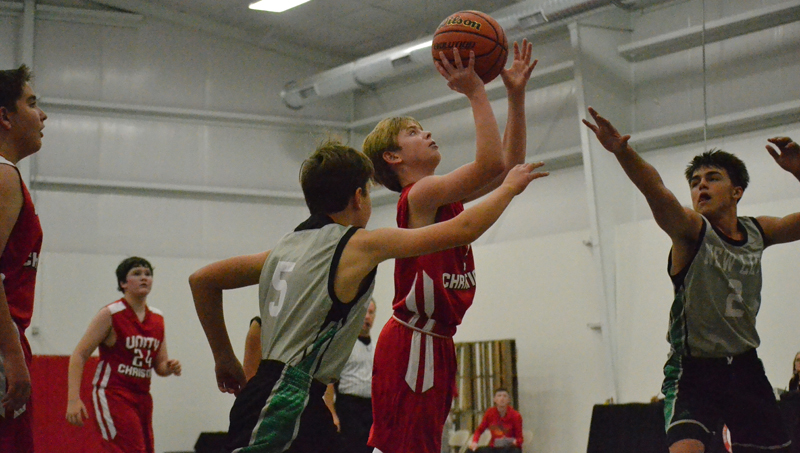 BUCKETS: Freshman guard Lucas Cutler maneuvers between two defenders to get the and-one layup Thursday night against New Life in the jayvee game. Cutler also saw minutes in the first quarter of the varsity contest and scored 13 points in the frame. (Mitchell Thomas / Daily News)

Jack Kirkman and Nicholas Jones each picked up 15 points, while Jones collected nine rebounds on the night.

Heading into halftime, the Warriors had a dominant, 47-7 lead. Coming out in the second half, many younger players entered the game. Adam Crisp and Amoz Gardner both came in and scored 11 points apiece, while David Hunter and Alex Crisp both drained a 3 in the contest as well. 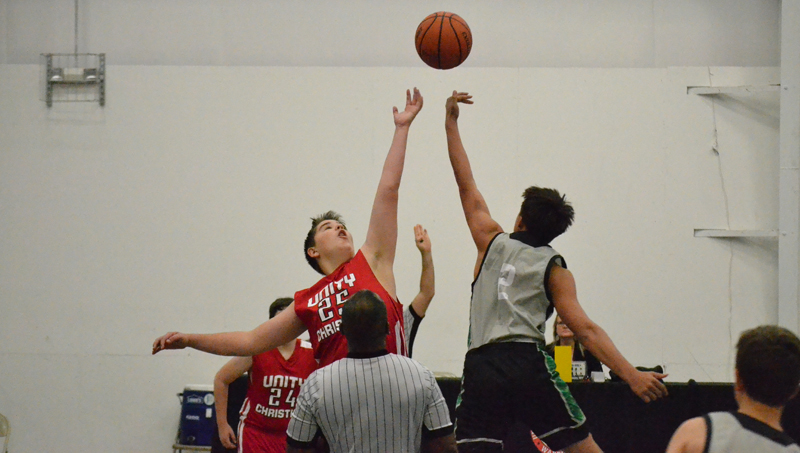 While head coach Joey Craft was out of town for the week, Alan Carawan filled the position to coach the Warriors for their contests against Terra Ceia and New Life this week.
“The early run got some confidence in our guys. We wanted to get a big lead to give our younger guys an opportunity,” Carawan said. “We usually always start with the full-court press, but teams that don’t exactly have a great ball-handler, we’ll press them. We’re not the best shooting team so we try to get some points off turnovers early and often.”

The Warriors will be back in action on Monday afternoon with a trip to North East Carolina Prep school in Tarboro.