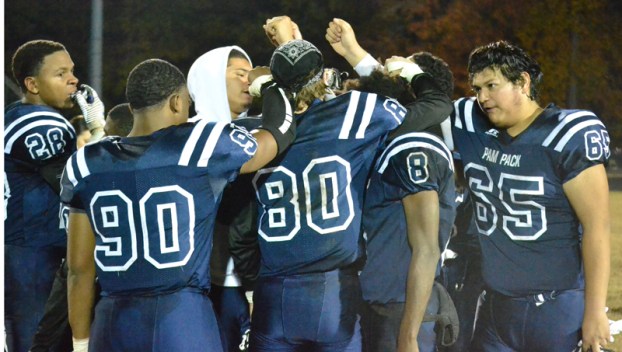 BREAKING IT DOWN: Washington’s senior class breaks it down one last time after Friday night’s second-round exit, marking the end of football season in Beaufort County this year. (MItchell Thomas / Daily News)

This fall sports season was as much fun as I could’ve imagined. Getting to know all the players and coaches back in the summer, while the players lifted weights, got to the field at 7-8 a.m. for practices and worked their tails off all season long to get into the playoffs was a special experience.

I have the utmost respect for all of the seniors that laid everything they had on the field one last time the past few weeks, because the hurt that they felt during their final games was something I have felt before myself. I encourage those seniors to continue to chase their dreams, whether those dreams are in sports or in other professional fields.

All three Beaufort County football teams should be proud of their efforts. Reaching the playoffs is a feat in itself, but to have three teams make the field and two reach the second-round is quite an accomplishment.

Numerous offensive school record numbers were set by Washington, while Northside’s senior quarterback Carter Boyd clipped the 1,000-yard passing mark for the season. The first time in school history a quarterback at Northside has thrown for that milestone in a single season.

Southside and Northside had many competitors make it to regionals for cross-country, and Southside’s Ethan Sommers clinched a sixth-place finish at the 1-A State meet.

In my first year in Washington, I have learned a lot. The community, the players, the coaches and fans have all been an absolute joy to interact with.

As the book closes on football season until next summer, it’s thrilling to imagine what the winter and spring sports season has in store. Basketball teams in the area should be pretty stout. Southside begins their brand new wrestling program, while Washington’s continues to improve, and the Pam Pack swim team is also looking to get back into the state championships after winning it all in 2016 and 2017.

After graduating from The University of Tennessee in Knoxville just over a year and a half ago, I had no idea what to expect upon my arrival. I have been very blessed to enjoy myself here in Beaufort County as much as I have. Can’t wait to see what all the area sports teams accomplish for the rest of the school year.

Turnovers and field position were the story of the night for the Pam Pack, and Salisbury’s defense set the tone.... read more