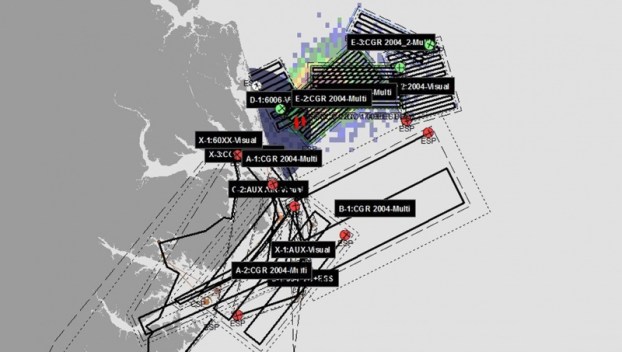 MASSIVE SEARCH: Pictured here are the cumulative search patterns completed by Coast Guard members in their search for Michael Bye, a 50-year-old man missing off the coast of North Carolina. Bye was scheduled to arrive in Belhaven over the weekend. (U.S. Coast Guard)

BELHAVEN — The U.S. Coast Guard has suspended the search for a missing boater who was scheduled to arrive in Belhaven over the weekend.

According to a U.S. Coast Guard press release, the USCG Fifth District Command Center was notified early Friday evening that 50-year-old Michael Bye had failed to check in with a family member at a designated time. Bye was sailing aboard a 35-foot recreational vessel, the H.M.S. Me II, traveling from New York to Florida.

The coast Guard suspended the search Monday afternoon after combing an area of approximately 10,000 square miles, covering an area from the Virginia state line to the mouth of the Neuse River.

All told, the search involved personnel from nine Coast Guard units across the North Carolina coast, and stretched between 50 and 75 miles out into the Atlantic Ocean. Using a cell phone signal, Coast Guard rescue coordinators determined Bye’s last known position to be near Kill Devil Hills.

“The decision to suspend a search-and-rescue case is never one we come to lightly,” said Capt. Jeffrey Janszen, Chief of Response for the Fifth Coast Guard District. “We offer our deepest sympathies to the family of Mr. Bye in this difficult time.”

It’s an unofficial 5K held in Washington on one of the biggest eating days of the year. Fitness Unlimited’s Turkey... read more