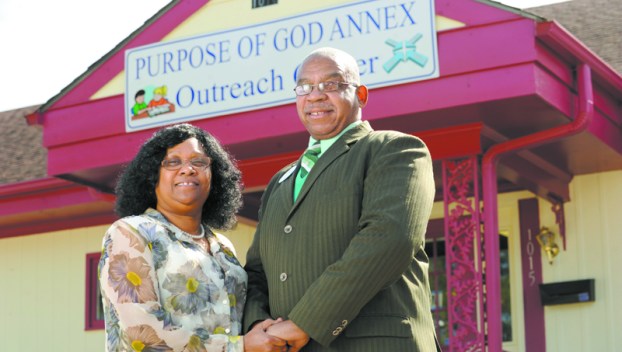 FOR THE KIDS: Bishop Samuel Jones Jr. and his wife, Mother Regina Jones, are asking the community to help support the cost of kids of their afterschool program after the Purpose of God Annex missed out on funding this year from the local Juvenile Crime Prevention Council. (Vail Stewart Rumley/Daily News)

The Purpose of God Annex is in the midst of a major fundraising campaign to raise money to support its afterschool program, after missing out on critical funding through the Juvenile Crime Prevention Council.

Nonprofit leaders Bishop Samuel Jones Jr. and Mother Regina Jones say their organization is facing a shortfall of approximately $18,300 after a misunderstanding led them to not apply for JCPC funding that would cover POGA’s afterschool program.

The Joneses say the confusion over the funding arose from the statewide “Raise the Age” initiative, which goes into effect Dec. 1. Under that initiative, teens ages 16-17 are still tried in juvenile court for nonviolent offenses. Local crime prevention councils throughout the state were in turn awarded additional funds to help meet the needs of that age group. The Joneses, however, say they took that to mean JCPC funding would not cover programs for 6-15 year olds.

While holdover JCPC funding covered POGA’s operation of its summer program through August, the missing funds hit hard when the group started up its afterschool program in September.

The nonprofit has had to start charging for its afterschool services, which in turn has put the program out of reach for some of the families it once served. Where the afterschool program once served an average of 25-35 kids each week, that number has shrunk to 17.

“We’ve had to charge, but we’ve lost kids because the parents can’t pay,” Samuel Jones said. “The kids that we are carrying are being carried by (people) adopting a child, local churches and patrons. That’s how we’re surviving right now.”

Jones said funds allocated by the City of Washington and the Louise Lester Foundation and other grant-funding sources have helped cover the cost of keeping some students in the program.

To help cover the shortfall, Jones has challenged 100 people in the community to give $100 each by the end of December to support the kids. As funding becomes available, the Joneses say they will start bringing back some of the kids who have missed out on afterschool this fall.

“A lot of them are sitting at home,” Samuel Jones said. “Of course, some are at risk youth that really need to be somewhere instead of on the streets.”

Regina Jones said that POGA plans to reapply for JCPC funds this spring, which would then kick in to support the organization’s summer programs, as well as afterschool programs during the 2020-21 fiscal year.

“We’re looking at what we already have donated and the money that will be donated to try and pull those kids back in between now and Jan. 31,” Samuel Jones said.

Anyone wishing to sponsor a child’s attendance to the afterschool program can visit the center from 9 a.m. to 5 p.m., Mondays through Thursdays, or mail a check written out to for that purpose to Purpose of God Annex, 1015 E. Sixth St., Washington, NC 27889.

Bath lights up the town Friday

BATH — Bath will light up the town for the holidays and the public is invited to take part in... read more