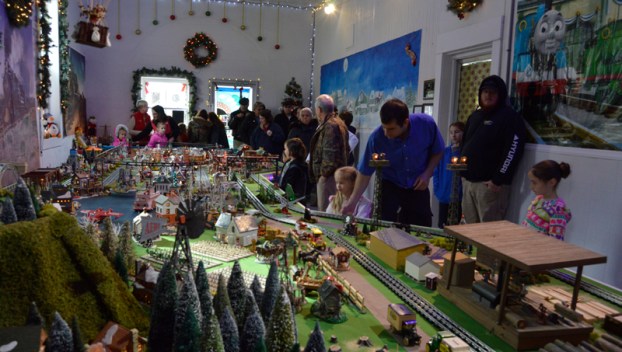 MICROCOSM: A total of 10 unique tracks weave through tiny towns and miniature landscapes at the Toy Trains of Belhaven exhibit, which opens this Saturday and continues through December. (Matt Debnam/Daily News)

Powerful locomotives steam down the tracks. Gaslight lamps illuminate the streets of a tiny town square as happy people go about their daily lives. Classic cars not seen since the 1920s and ’30s busily roll down the streets.

It’s a world of wonders in microcosm, and it’s coming to Belhaven starting this Saturday, as Don Stark presents his eighth-annual Toy Trains of Belhaven display at the town’s old City Hall.

“It’s our way of giving back to the community,” Stark said. “We feel that Belhaven’s a special place, and it’s just a nice thing to be able to share. I grew up with trains as a child and just think of model trains as being a part of Christmas.”

With a sprawling setup, this year’s display will feature 10 unique tracks, all running through fully-decorated neighborhoods in an impressive installation that fills an entire room. Every item in the display comes from Stark’s personal collection, ranging from newer models to nearly 100-year-old toy trains.

“Trains in that early era were more toy-like than accurate reproductions of existing trains,” Stark said. “That’s why we call ourselves ‘Toy Trains of Belhaven’ instead of ‘model trains.’ These are not exact models, these are toys.”

New to the display this year, Stark has added a piece that will bring back memories for older generations. From the 1910s through the mid-1950s, the Tunaville Trolley comic strip made appearances in 260 newspapers throughout the U.S., and now it’s coming back to Belhaven this year.

“I think everybody enjoys it,” Stark said. “We’ve got some old-timers who are nostalgic about the old days. Mostly what we portray is life in America prior to World War II. We have old cars, old trains and old houses. It’s a certain era of time before modern electronics.”

Each year, the spectacle draws people to Belhaven from across eastern North Carolina. For Belhaven residents with company over the holidays, the trains are a ‘can’t miss’ attraction. Stark says young and old alike always find something to appreciate in the display.

“We’ve got some other little surprises,” Stark said. “We’ve got new animations and 30 buttons for children to operate different accessories on the platform. They’ll see things that they’ve never seen before.”

Toy Trains of Belhaven marks its grand opening for the season from noon to 7 p.m. Saturday. The display is open to the public every Friday (1 p.m. to 7 p.m.), Saturday (noon to 7 p.m.) and Sunday (noon to 4 p.m.) in December. The toy trains will also roll on Dec. 26 from noon to 5 p.m. for a post-Christmas outing. Admission is free, but donations are accepted to support ongoing efforts to restore the historic caboose in the heart of Belhaven.

The Purpose of God Annex is in the midst of a major fundraising campaign to raise money to support its... read more