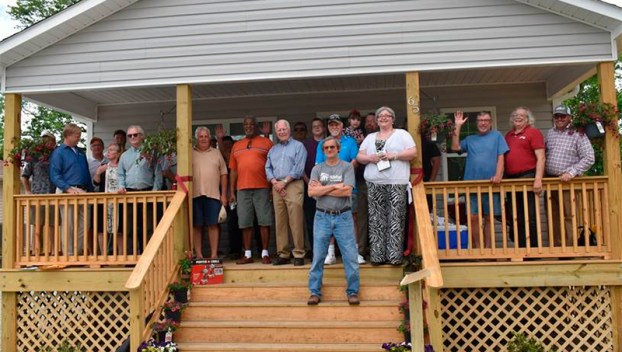 From Habitat for Humanity of Beaufort County

After some minor paperwork delays with State Employees Credit Union, which gave the Iveys a 0% interest mortgage loan, the house closing went off without a hitch. The Iveys were gifted a Habitat for Humanity T-shirt with many local sponsors’ names on it, plus a Lowe’s Home Improvement gift card to help out with expenses of owning a new home. Glen Ivey said he can’t wait to spend it at Lowe’s.

Glen and Jamie Ivey said they couldn’t be happier with their new home on Adams Street in Chocowinity. The Ivey’s put in more than 300 hours of sweat equity helping building their house. They said they learned a lot, and they had fun while working hard.

Rich Neubert, project team leader, said the Iveys, after working all day at their regular jobs, came to work on the house also well into the darkness, installing insulation, painting walls or whatever else needed to be finished. 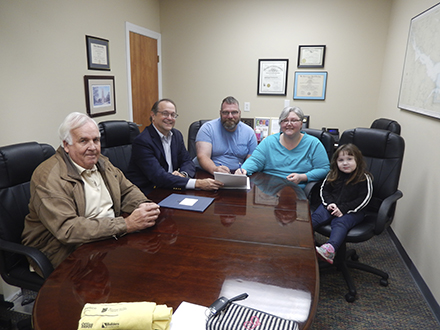 Because local volunteers helped frame the house, lay the floor, installed windows and doors, and the electrical, HVAC and plumbing subcontractors either worked for free, or gave significant discounts, the Iveys were able to save about $15,000 off the final house cost. This gave them immediate, positive home ownership equity.

Neubert, who was the Habitat for Humanity building committee chairman for this house, said that all Habitat for Humanity Beaufort County homeowners are offered a 0% interest rate mortgage that must be paid off just like a regular mortgage. Due to the immediate equity created within the houses, there is an 11-year vanishing secondary mortgage added to the mortgage, so that the new homeowners can’t flip the house in the first week.

Neubert said, all in all, it’s an amazing deal for the homeowners, and it’s a good deal for Habitat because the organization gets the money back when the mortgage is paid in full. So anyone donating to Habitat from their estate could conceivably live and help neighbors for an extremely long time. Anyone interested in Estate Planned Giving, can contact Habitat for Humanity of Beaufort County for more information 252-623-1750, or call Neubert, Network 1 Financial Securities, Inc. at 252-623-2029 Member: SIPC, FINRA.

Looking forward, these homeowners, like all Habitat homeowners, will be considered part of the “Habitat family” because after the house is finished, Habitat will continue to help them with any ownership issues down the road if asked.

Neubert said, “Habitat for Humanity does not give any handouts; we do give them a hand up.” 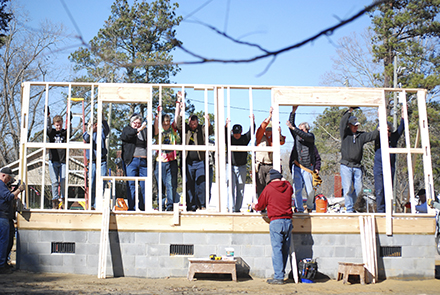 IN PROGRESS: In January, the framing of the house went up on the Iveys’ home. The couple and their two children were forced from their Hurricane Matthew-damaged mobile home to renting, but now have a new home on Adams Street. (Habitat for Humanity of Beaufort County)

After the closing, the Iveys said they are looking forward to the holidays and spending time with their children in their new home.

Greg May, a Habitat for Humanity board member who also has years of construction experience and is OSHA-trained, will be the team leader in charge of the next Habitat house.

May said if anyone is interested in volunteering they should contact Habitat for Humanity at 252-623-1750, or visit the website at www.beaufortcountynchabitat.org and leave name, email, and phone, and Habitat will return the message.

May added that Habitat has some limited board member seats available, and the nonprofit is taking applicants in December and January 2020. Any candidate is invited to the monthly Habitat for Humanity board meeting held every second Tuesday at 7 p.m. at St. Peter’s Episcopal Church, 101 N. Bonner St, Washington, NC 27889.

The Purpose of God Annex is in the midst of a major fundraising campaign to raise money to support its... read more