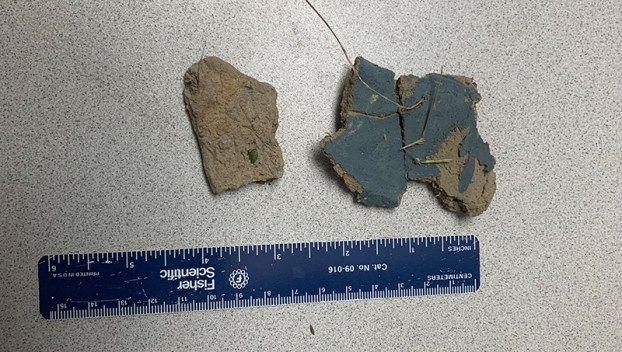 OFF-COLOR: While blue mud is known to occur in anaerobic soils, the reason for this week’s caller’s blue mud has to do with modern tires. (Gene Fox)

Yes, there really is blue mud

I took a call a few weeks ago that was intriguing and interesting to say the least. The client does quite a bit of gardening in the community and has helped many others garden in the area as well. I have got to say, though, I have never gotten this question before! He called with a concern over the soil in his yard turning blue. It was a very legitimate concern over whether there was something harmful in the soil itself.

I have seen “blue mud” before and thought I might have an idea of what is going on here. Often these are referred to as gleyed soils. This is indicative of a wetland soil that has been in an anaerobic (void of oxygen) condition for some time. Once saturated for long periods of time, void of oxygen, microorganisms turn to other elements within the soil for respiration. This depletes these elements and, in some cases, can turn the soil a grey to bluish color. This is usually seen in very low areas that typically have organic, or what we tend to call “peat,” soils. However, this was not the case in this situation. These soils, once they are brought to the surface where they are in contact with oxygen, often change colors very quickly.

The soil in this situation had been excavated to make a pond some time ago and, as such, it should have oxidized by now. The “blue mud” in this client’s situation was coming well after excavation. The client said the blue color appeared as the soil dried. By now, I was very intrigued as to what was going on so I decided to go and have a look for myself!

Upon doing a site visit, I found that the soil was sticking to the client’s tractor tires. As it dried, the side that was stuck to the tire formed a blue crust on the soil. He reported that it happened on this tractor and on his previous tractor too. He said it even happened to his truck tires. It was apparent that there must be some kind of reaction happening between the soil and the tire, but what could cause such a thing?

I did some research and found that it wasn’t necessarily a reaction that was occurring as much as an osmotic type of thing. Modern tires are treated with oils to protect them from oxidation, cracking and dry rot. When the mud is packed on the tire, it draws out the oil from within the rubber compound. This is apparently a typical issue that comes out on small tractor tires, truck tires, off-road motorcycles and ATVs. The blue can be washed off with a little scrubbing and is nothing to worry about. It does not mean that your tires are aging prematurely or that there is something harmful in your soil.

This is one of the more interesting situations that I have come across since being a horticulture agent! If you have something happening in your neck of the woods, don’t let it turn you blue, give your local Extension Center a call!

If you’re having trouble with growing in your home landscape, call the Extension office at 252-946-0111 or email Gene Fox at gene_fox@ncsu.edu. Interested in being a Master Gardener? There is going to be an Extension Master Gardener Volunteer training series this spring. Sign up for our information list at go.ncsu.edu/bocoemginterest to receive updates. We will have two informational meetings on Dec. 10, one at noon and one at 5 p.m. Call the Extension center today to learn more or visit Facebook at the Blacklands Area Horticulture page!

Light up the City brings holiday cheer to Washington

HOLIDAY BELLS: Among the festivities during Washington’s Light Up the City event Tuesday evening, the River City Ringers offered a... read more