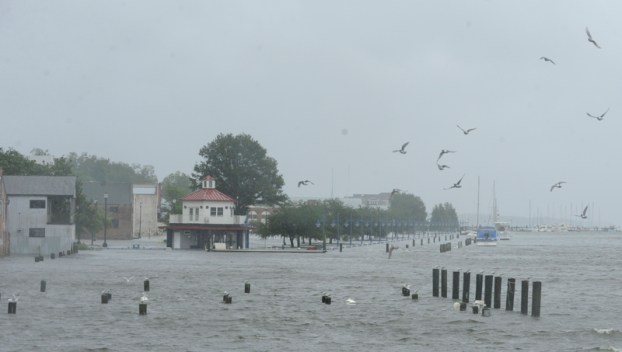 For residents of eastern North Carolina, planning and preparing for natural disasters is a part of life. From hurricanes to sudden, severe storms, the impact of these events can be devastating. To help stay ahead of these disasters, local officials in a four-county region are in the process of updating a plan to help mitigate some of the potential impacts that come with such events.

The Pamlico Sound Region Hazard Mitigation Plan, which encompasses county and municipal governments in Beaufort, Pamlico, Craven and Hyde counties, is updated every five years to maintain eligibility for federal funding related to hazard mitigation. This ranges from elevating and buying out homes that have repeated losses from flooding to grants to local governments for planning and projects to reduce the risk from future disasters.

“When we mention the term mitigation, the first thought that pops into (the public’s) mind is, ‘OK, they’re raising houses,’” said Chris Newkirk, Beaufort County operations chief of fire and emergency management. “But mitigation goes beyond raising residential homes. Mitigation and a lot of those grant funds can be applied to resiliency of infrastructure or the resiliency of county government.”

The state of North Carolina requires the plan to be in place for local governments to apply for public assistance after a disaster declaration, which involves reimbursement for some expenses incurred during recovery and cleanup.

The plan also gives local officials a clear picture of what risks pose the greatest threats to public safety. Risks analyzed in the plan include both common occurrences such as flooding and severe weather and less common threats such as earthquake and wildfire hazards. The result is a comprehensive look at the hazards that could impact the region and a long-range plan to help address potential problems.

“We’ve gone through and looked at some of the emergency response mechanisms that are available and being carried out at the local level and kind of refreshed the strategies to the current state of affairs,” explained Landon Holland, planning project manager for Holland Consulting Planners. “There aren’t drastic, wholesale changes to a lot of the strategies. We kind of go through, update them, take out what’s no longer relevant and put in what is now relevant.”

Holland says individual counties once prepared their own plans to submit to the federal government. That proved to be a costly burden for many small towns and counties, leading many areas to move to a regional model, with firms such as Holland Consulting taking on the responsibility for developing plans for multi-county regions.

While the Beaufort County Emergency Services serves as the overarching emergency management agency for Beaufort County, representatives from local municipal governments also participated in the planning process, which began early this year. For Belhaven Town Manager Lynn Davis, attending the planning sessions was a learning experience.

“It was very interesting to me to understand the steps and why we have (the plan),” Davis said. “… It’s going to help us, because even in our individual communities, we have our own planning boards and people issuing building permits. Every detail is related, so having this hazard mitigation plan also helps us. We are a Community Rating System community with regard to the National Flood Insurance Program. Our decisions and policies that we put into place as a greater regional plan have an impact on our CRS score, which impacts the flood insurance rates paid by the citizens of Belhaven.”

The final Pamlico Sound Region Hazard Mitigation Plan meeting will be at 3 p.m. on Dec. 4 at the Pamlico County Human Services Conference Room, 828 Alliance Main St., Bayboro. A public interest meeting will follow at 5:30 p.m. at the same location. To view the plan in its entirety, visit www.pamlicohmp.com.

With giving on the mind this holiday season, it is easy to take one of life’s greatest gifts for granted... read more