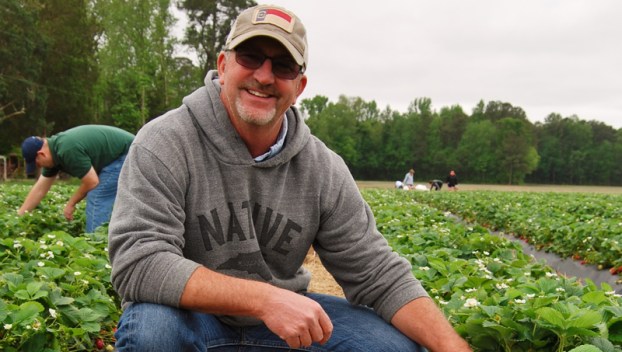 MR. PRESIDENT: Lifelong Chocowinity farmer Shawn Harding, pictured here amidst his strawberries at Southside Farms, has been elected to serve at the 12th president of North Carolina Farm Bureau. In the position, he will oversee the N.C. Farm Bureau Insurance Companies, as well as the N.C. Farm Bureau Federation, which provides programs and services for N.C. farmers and advocates for their interests in Raleigh and Washington, D.C. (File photo)

CHOCOWINITY — Growing up on the south side of the river in Chocowinity, agriculture has always been a big part of Shawn Harding’s life.

From helping his father, Billy Harding, grow tobacco and other crops on the family farm in the ’70s and ’80s, to transforming that business into one of Beaufort County’s best-known berry and produce farms, Harding has spent 30 years of his adult life continuing the tradition of agriculture. Now, he will be a voice for farmers statewide in North Carolina.

Tuesday, Harding was elected to serve as president of North Carolina Farm Bureau, succeeding longtime N.C. Farm Bureau President Larry Wooten, who served for 20 years before his retirement. Harding is the 12th president of the organization since its founding in 1936.

While Farm Bureau is perhaps most widely known for its insurance offerings, the insurance company is only one facet of the organization. The North Carolina Farm Bureau Federation not only offers a variety of services and programs for farmers, but also serves as a legislative advocate for members on a variety of agricultural issues.

“It’s the voice of agriculture,” Harding said of the organization. “Our farmers need a voice in Raleigh and Washington (D.C.), and that’s what Farm Bureau does for us. So I have just appreciated and loved the organization, really, all my life.”

Harding, no stranger to hard work, says he’s ready to roll up his sleeves in the political arena as well. Between tough harvests the past few years and hard economic conditions, Harding says he knows well the struggles North Carolina farmers are facing.

“It has been a tough time in agriculture, probably, I think most people have agreed, as tough a time as we’ve had since the ’80s,” Harding said. “First of all, it’s just letting people know how tough it is on the farm. But then it’s advocating to try and fix some of those problems, whether it’s helping our farmers recover from hurricanes or trade deals we need to get done to help with our prices. Farmers are tough, and they’ll withstand storms, but when you get storms on top of low prices, that’s the perfect storm.”

Harding says he hopes to work on issues such as labor and immigration, two national topics that have implications for local farmers.

Meanwhile, back in Beaufort County, the Harding tradition of farming continues strong. Harding’s son, Billy Harding, named for his grandfather, has taken on the management of Southside Farms as his parents begin a new chapter of their lives in Raleigh.

“The opportunity to lead North Carolina Farm Bureau is the only thing that could make me leave the farm, and it’s an honor to be chosen by my peers to serve as president,” Harding said.

Harding is a 1988 graduate of N.C. State University. During his 30 years of farming in Beaufort County, he was heavily involved with Farm Bureau, both locally and at the state level.

With all that commitment to the organization, Harding says he’ll still always remember his roots here in Beaufort County and that plot of family land in Chocowinity.

“I appreciate where I’m from, my home county,” Harding said. “I’m not going to forget Beaufort County. I’m going to be in Wake County now, in Raleigh, but I’m still going to have a farm in Chocowinity to come back to.”

To learn more about North Carolina Farm Bureau and the services and advocacy it provides, visit www.ncfb.org.

Over the past 22 years, First Church of Christ has put on a Christmas concert like no other. This weekend,... read more