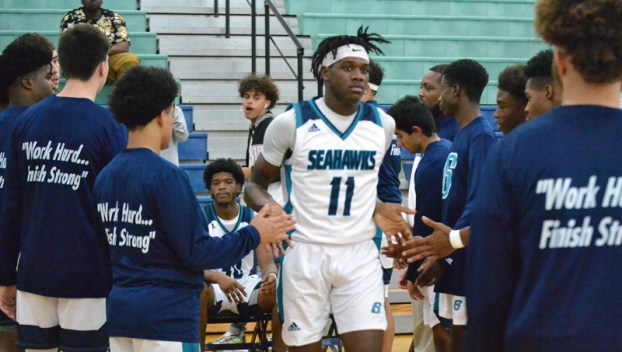 PRE-GAME: Southside’s junior forward Nehemiah Worsley high-fives his teammates as his name is announcer prior to the Seahawks’ game against Perquimans a couple of weeks ago. (Mitchell Thomas / Daily News)

The first month and a half of high school basketball season has been wild. So many good games, big performances and great teams in this area have gone toe-to-toe with some of the best talent in North Carolina.

Beaufort County basketball teams have a combined record of 56-37 so far this season in both boys and girls hoops. That’s a 66% win percentage. Those are good odds for everyone to step out to their local gym and support these young men and women to victory this season.

The Unity Christian Academy Lady Warriors have continued to impress this season. They now own a 12-0 record and won the Panthers’ Tip-Off tournament a couple of weeks ago in Pinetown.

Unity’s boys (6-5) have had an up and down season, but with the help of Jack Kirkman, Colby Case and Jeff Harris, they have the ability to score points in bunches at any given time.

The Pam Pack (5-3) basketball team was off to the best start in decades after beginning the year 4-0. Washington continues to play tough opponents, though, and continue to prove that they belong in the conversation amongst the elites in eastern North Carolina. The only losses they’ve suffered were against three state championship contenders in East Carteret, Kinston and Farmville. The Pam Pack will have a tough test this weekend as they travel to Plymouth for the Washington County High School holiday tournament.

The Lady Pam Pack (1-5) has struggled early on, but have an extremely young team. Ralph Biggs and company will likely put it together as the season progresses.

The Southside girls’ (5-2, 1-0) basketball team has been on a roll recently, winning their last four contests against South Creek, Perquimans and Ayden-Grifton twice. They’re doing it with defense, and their freshman guard Ka’Nyah O’Neal has burst onto the scene to elevate this team’s level of play. They’ll play a talented Edenton Holmes team at South Creek on Friday, Dec. 27.

The Southside boys (2-5, 1-0) are under a new regime with head coach Davelle Whitney at the helm, and they just notched their first conference victory of his young coaching career with a 56-44 win over South Creek on Tuesday.

Northside (2-3) lost its top-two leading scorers from last season, and are still finding their offensive rhythm. However, seniors Tyler Turner, Omari Crandell and Carter Boyd have taken over the scoring roles with Zakkai Wilson returning to the lineup in the coming days.

The Lady Panthers (1-3) experienced a couple of early hiccups, but shouldn’t be discouraged. With upperclassmen Katie Godley, Prentiss Thomas, Cameron Rose, Deidre Spencer and Alexia Sommers, they’ll rally together and figure it out under head coach Michelle Leathers. Both Panther teams begin conference action this weekend at Pamlico County.

Terra Ceia (9-3, 4-1) has gotten hot in the last couple of weeks and have rattled off seven straight wins. Matt Van Staalduinen and Gunner Couch have put the Knights in great position to return to the top of North Carolina Independent School Athletic Association’s Tar Heel Independent Conference.

Pungo Christian Academy’s boys (9-3, 4-0) basketball team might have something to say about that, though. They defeated Terra Ceia for the first time in six years earlier this season with a 48-47 victory in the Knights’ building. There are some shooters on the Raiders’ squad, and they’re a tough matchup for anybody on their schedule.

The Lady Raiders have been consistently good all season. Lauren Kellie Ricks and Emma Williams have become the go-to scorers and have guided their team to an 11-2 start to the year. They’ll have a couple of weeks off before returning to the floor on Jan. 7 against Hobgood Academy.

The basketball talent in this area is something special. No matter what gym you decide to step out to on any given night, is likely to be a show. There’s nothing quite like running out onto the floor with every seat in the house filled up. It truly does have an affect on the outcome of the game, so do your part.