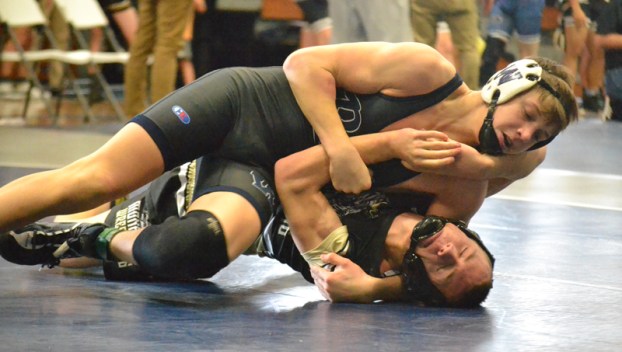 UNSCATHED: Washington’s senior wrestler Brodie Moore pins an opponent during the Pam Pack’s Saleeby tournament a couple of weeks ago. Moore went 7-0 throughout the past week in his matches at a duals event at North Brunswick and in conference competition at Ayden-Grifton this past Tuesday. (Mitchell Thomas / Daily News)

The Pam Pack wrestling team continues to dominate the conference, and have also had some success during weekend events during non-conference competition. They defeated Ayden-Grifton 51-24 and North Lenoir 55-24 Tuesday evening at Ayden-Grifton High School.

Head coach Chris Penhollow has expressed the importance of winning within the conference multiple times to be able to get the top seed in the conference, and wrestle in the Washington gym a couple of times before moving into the regional and state rounds.

While many wrestlers had great performances throughout the past week, Brodie Moore went a perfect 7-0 through the weekend duals at North Brunswick, and in conference competition against Ayden-Grifton and North Lenoir.

On Tuesday, Knowledge Griffin, Davion Coward, Walt Gerard, Isaac Campbell and Moore each won both of their matches against their two opponents.

During Saturday’s duals at North Brunswick, the Pam Pack wrestled hard against stout competition. They went 3-2, with two narrow losses to North Brunswick (37-36) and Topsail (42-30).

Their wins were impressive. They notched a 40-36 win over Eugene Ashley High School out of Wilmington, as well as a 50-28 win over South Brunswick, and a decisive 63-15 victory over Hoggard High School.

Over the weekend, Moore and Hartley went 5-0 against some tough opponents, but wouldn’t be denied.

Moore’s success this season follows suit with a NCHSAA State Tournament appearance last year, and a second-place finish in the Beast of the East tournament this year at Croatan High School.

“Hard work and sacrifice are the main things that have helped me get to where I am today. I want to thank all my coaches, not only from Washington, but Jamie Yezarski from New Bern as well,” Moore said. “The past two summers I have dedicated myself to improving at this grueling sport. The season isn’t over yet, there is still plenty to accomplish. Most importantly, I thank God for the ability and opportunity to compete at a high-level in this great sport.”

Head coach Chris Penhollow also said that not only did Moore have a really good week, he mentioned Hartley’s hard work. He went 6-1 throughout the week. Hartley asked Penhollow to wrestle a Top-10 ranked North Lenoir wrestler who outweighed him by nearly 50 pounds, resulting in his only loss of the week.

The Pam Pack will be back in action this weekend in the Jolly Roger tournament at Corinth Holders High School. The festivities will begin around 10 a.m. in Wendell.