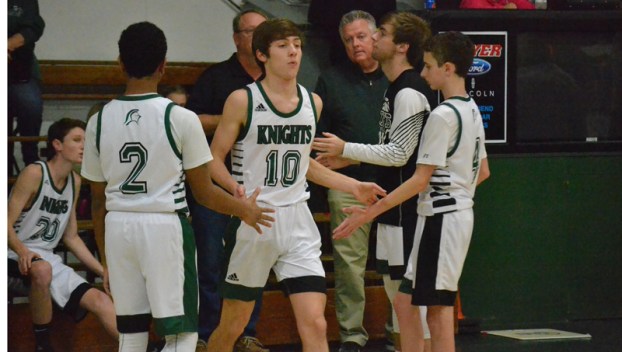 There was plenty of basketball being played this past weekend around Beaufort County, and local schools picked up some big wins, including a few conference victories.

It was a battle between the top two teams in the Coastal Plains 1-A Conference, but the defending state champion Lady Hurricanes had too much in the tank for four quarters against the young Seahawks.

The Hurricanes battled some early foul trouble, which was huge as Pamlico only has seven players. 12 first half fouls endangered many Hurricane players, but only one fouled out in the second half. By that time, they’d already built a 20-point cushion.

Southside went step-for-step with Pamlico early on, as Ka’Nyah O’Neal started out 3-for-3 from the field with a couple of steals. She finished with 26 points to lead all scorers in the contest. O’Neal was selected for WITN’s Pepsi Player-of-the-Week with last week’s performances, and didn’t disappoint the camera crews on Friday night.

Jasmine Blango picked up nine points on the evening, Laquisha Woolard added seven, Shantel Cannon had five and Sarah Petty scored three on the night for the Seahawks.

Southside will have another tough test come this Friday night when they host Riverside (10-4, 3-1). The Knights’ only conference loss also came at the hands of Pamlico County. Tip off is set for 6 p.m.

The Lady Pam Pack (3-10, 2-2) have had a resurgence in the second half of the season and are playing much better basketball since the New Year.

They went on the road in a hostile environment and stole a win away from South Lenoir (8-6, 2-3).

Washington has an opportunity to earn its third consecutive conference win against West Craven on Friday night in Vanceboro.

The Lady Panthers (3-6, 2-2) came up short despite making a fourth quarter run at the Hurricanes on Friday evening.

Northside will have a chance for redemption on Friday night at home against Cape Hatteras (5-4, 3-0). Tip off is set for 6 p.m.

The Lady Knights (7-5, 3-3) used overtime to complete a 10-point fourth quarter comeback against the Albemarle Colts on Friday evening.

The Lady Raiders (12-3, 5-1) suffered its first conference loss of the season on Friday night falling to the Eagles (8-3, 6-0) in Lasker on Friday evening.

The Pam Pack (9-5, 3-1) got back on track after suffering a road loss to Southwest Edgecombe on Wednesday evening. Washington traveled to South Lenoir on Friday without Omarion Blount and were still able to come away victorious.

“South Lenoir isn’t bad. They were really scrappy,” Bryant said. “They were everywhere. We gave up a lot of offensive rebounds but we did a great job of keeping our heads in the game.”

The Pam Pack are off until Friday due to testing, but return to the floor Friday night in Vanceboro to take on West Craven (4-8, 1-4).

A scrappy Southside team wouldn’t go away on Friday night. The Seahawks cut their deficit down to four points in the third quarter despite trailing by 15 at halftime. In the fourth, the Hurricanes sped past the Seahawks to maintain first-place in the Coastal Plains 1-A Conference.

The Seahawks (3-7, 1-2) return to the floor on Friday night against Riverside.

Junior guard Gunner Couch had a career night as he dropped 39 points against the Colts on Friday night. He was 7-for-11 beyond 3-point land and shot 61% from the field.

Matt Van Staalduinen had another 20-point performance, putting up 23 points in the Knights’ 14th victory of the season.

The Raiders’ defense came to play on Friday night, and it led to plenty of offense. Pungo improves to 10-4 with a 5-1 conference mark. They will face a solid Albemarle team at home this evening. Girls tip set for 6 p.m. and the boys’ game will follow.

The Pam Pack wrestling team continues to dominate the conference, and have also had some success during weekend events during... read more