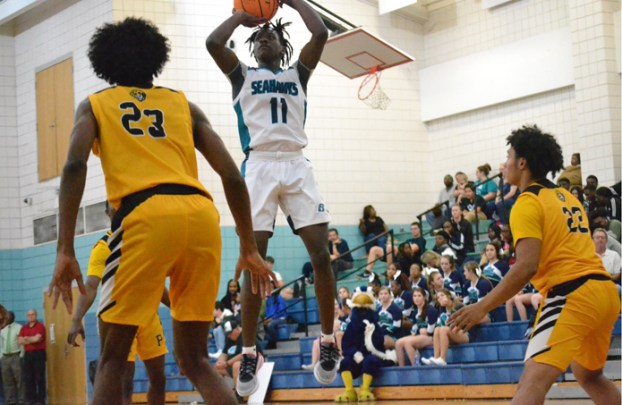 JUMPER: Southside’s Nehemiah “Nemo” Worsley pulls up from 15-feet in the Seahawks’ game against Perquimans earlier this season. Worsley picked up 18-points to lead the way in the Seahawks’ 67-42 victory Tuesday night.(Mitchell Thomas / Daily News)

Southside’s high school basketball teams were able to do something they hadn’t been able to do in quite some time: sweep their cross-town rival, Northside.

Southside boys’ head coach Davelle Whitney said that his team came together on Tuesday night.
“We were playing like a team (on offense). When you play like a team, you pass the ball, if you got an open shot you shoot it,” Whitney said. “Just happy shots went in this game.”

The win for Southside snapped a two-game losing streak. The Seahawks improved to 4-8 overall and 2-3 in the Coastal Plains 1A conference.

Southside scored its second-highest total in points this season, and the 42 points scored against was seven points shy of a season-low. It was the offensive outburst that was welcomed by Whitney, who is accustomed to the Seahawks’ defense.

“Defensively, all year we have been pretty fine, we just haven’t been able to put the ball in the rim,” Whitney said. “But defensively we talk, on the ball everyone did their job, and as you can see they caused a lot of turnovers.”

For Northside, it’s a third-straight loss that drops them to 5-8 on the season and 2-4 in conference play.
“We’re just not playing fundamentally sound basketball,” Northside boys coach Jared Adams said.
Turnovers, and shooting 11-for-29 from the free throw line doomed the Panthers.

On the other end of the floor, it wasn’t just one thing that plagued them, according to Adams — it was many.

“Defensively, we’re not boxing out; we’re not dropping backside; we aren’t communicating; we’re getting out of position; we’re jumping the passing lanes and getting beaten backdoor,” Adams said.

Northside hasn’t had a practice in a week and a half because of exams. According to Adams, that has made things more difficult.

The two teams both got back on the floor on Wednesday. Southside played Mattamuskeet for the second time this season.

Northside traveled to Camden County in an attempt to avenge their loss to the Bears from earlier in the season.

“Every possession, every rep, every play you’ve got to execute to your fullest. We’ve got to cut back on turnovers,” Adams said.

The Lady Seahawks erased an early deficit through the first three quarters. They trailed 40-34 at the end of the third, but roared back to score 28 fourth quarter points to earn the victory.

The Southside girls improved to 10-4 and 3-2 in conference with the win, while Northside dropped to 4-8 and 2-4 in conference, despite Prentiss Thomas’ 23-point outing.

Wearing the jersey No. 1 comes with high expectations. Washington’s Omarion Blount has lived up to those as he continues... read more