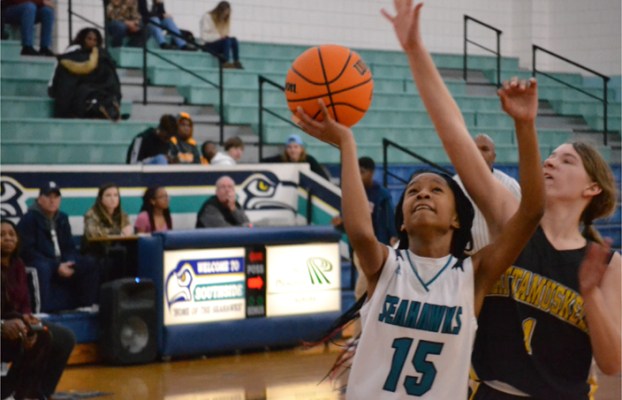 THROUGH CONTACT: Southside’s junior guard Taje Speller gets out on a fast break and lays the ball up to earn the basket and the foul during the Seahawks’ win over Mattamuskeet on Wednesday night. (Mitchell Thomas / Daily News)

Southside’s boys and girls’ basketball teams are back on track after winning games on consecutive nights. The girls defeated Mattamuskeet 69-13, while the boys won 65-38 on Wednesday night inside Southside’s gymnasium.

The Lady Seahawks got off to a hot start, as Ka’Nyah O’Neal scored 18 first quarter points to give Southside a nice cushion to begin the game.

Southside’s interim head coach Rosalyn Grimes put in her entire team through various parts of the game to get some much-needed experience.

Grimes is taking over for the remainder of the year, after head coach Milton Ruffin had a medical condition that will keep him sidelined until next season.

“We’re going to continue to work at the same pace we have been. I’m excited to coach the girls and take them all the way, hopefully,” Grimes said after the lopsided victory. “We played well as a team tonight, executed on offense and defense and everything was working, especially in that first half. We just have to make sure we continue to run our plays consistently and improve our passes.”

As for the boys, they got off to a slow start, even trailed the Lakers by as many as eight points before the Seahawks stepped on the accelerator late in the first half. Ty’Nahj Smith and Zach Greene got Southside going, and sparked a 9-0 run to close the half and possessed a 34-23 lead going into the break.

Coming out of the second half, the Lakers made one last push on a 6-0 run, but they couldn’t overcome their own turnovers.

Southside took advantage, and stomped on the accelerator through the last quarter and a half of play.

Smith’s 22 points led all scorers in the contest. Zach Greene added 19, and Kaleb Taylor picked up seven points for the Seahawks. 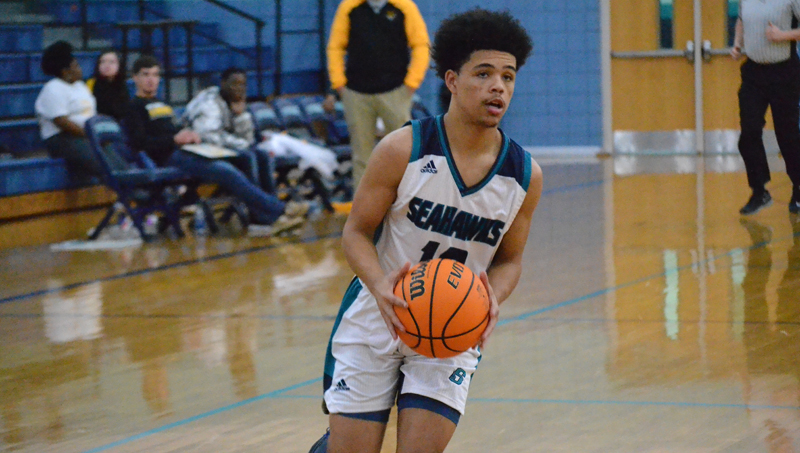 SECOND-STRAIGHT WIN: Southside’s Kaleb Jones-Taylor finds space for a lay up during Southside’s 65-38 victory over the Lakers on Wednesday night for the Seahawks’ second consecutive victory.

“We were just going with the flow of the offense. We got some fast break points pretty easily, and really it was our defense,” Smith said after Southside’s second consecutive victory. “We have to get more rebounds (going forward). We need keep being aggressive on defense. Our goal is still to be conference champions.”

Southside head coach Davelle Whitney was happy his team got the win, but knows there’s still much to improve.

“We hustled, moved onto the next play after a bad one tonight and played hard,” Whitney said. “It’s definitely a different feel of the game when you play your rival the night before, then play a team you’re better than the next night, sometimes it can be difficult to get going. I’m satisfied, but I’m not satisfied. Defensively, we’re not too bad, but layups, free throws and rebounds need more consistency. When you’re playing Tarboro, Pamlico and Riverside you’ve got to do those things well to win.”

The Seahawks will be back in action this evening at South Creek. Southside defeated the Cougars in their first match up this season, 56-44. This time, they’ll travel to Robersonville.