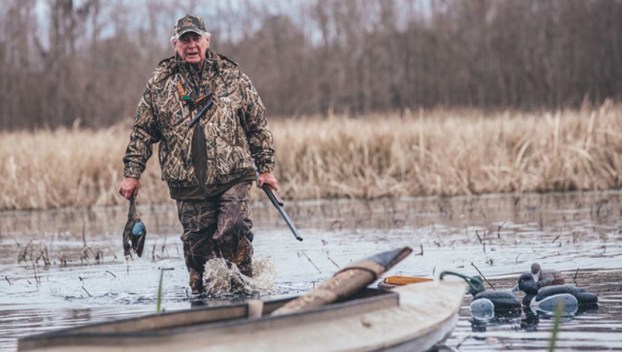 FOCUS ON CONSERVATION: For more than 40 years, the Beaufort County Chapter of Ducks Unlimited has promoted conservation and stewardship of local wetlands and wildfowl populations. (Ducks Unlimited)

BATH — Catered dinner, silent and live auctions, raffle prizes and the camaraderie of likeminded hunters and conservationists will be featured at the Feb. 8 banquet of Beaufort County’s chapter of Ducks Unlimited. The event will be held at Southern Acres Barn in Bath. Dinner will be offered by Cannon’s Catering of Williamston and music will feature area disk jockey Butch Oliver.

Gibbs Moody, a recent member of Beaufort County’s chapter, said the aim of this fundraiser is threefold: to collect funding for the group’s conservation efforts, attract new members for the local chapter — which has existed for approximately 40 years — and further educate attendees interested in duck hunting and state wetlands conservation.

“If it weren’t for this group’s efforts, there would be a significantly lower population of water fowl and migratory birds here,” Moody said, adding that, while in recent years the overall population of such winged creatures has been “down by about 30 percent…the bright spot in all of this is that there are now more wetland birds here due to hunters with consciences about wetland preservation.”

The group’s national website touts the conservation of more than 14 million acres of waterfowl habitat across North America since its inception in 1937, a result of the group’s approach to wetland conservation.

Priority areas include large sections of America and Canada. Its focus in North Carolina includes the state’s bays, sounds and coastal wetlands, which “provide important habitat for hundreds of thousands of Atlantic Brant geese, several species of diving ducks, black ducks, and other species of puddle ducks.”

Moody said Ducks Unlimited is one of the nation’s largest employers of biologists, water conservationists and a whole range of environmental specialists, adding that DU members “are into the entire hunting concept, including research and training off-season, as well as sporting ethics during the season.”

He said Beaufort County’s new DU chairperson, Doug Bissette, is looking forward to inspiring the chapter’s dedicated volunteers to continue and bolster this area’s wetland conservation efforts. Moody expressed hope that the banquet will inspire those who attend.

The live auction includes a three-day hunt at Lake Saint Claire, Canada, a location Moody said is, “one of the most productive and busy flyways in North America, featuring several dozen varieties of fowl including both diving ducks and puddle ducks, which are rarely seen together.”

That hunting trip includes professional guide service, lodging and all meals. Among the raffle prizes are a speckled belly goose decoy that won “decoy of the year”, a Damascus knife that won “knife of the year”, and a Beretta A400 Extreme Plus 12 gauge 3.5 shotgun.

Cocktail hour begins at 5:30 p.m. Dinner is served at 6:30 p.m. Moody said the auctions and raffle will take place during or after dinner. Ticket prices are $50 for single attendees, $75 for couples and $25 for youth 17 years old and younger.

By KAREN THIEL For the Daily News In 1978, 26 people worshipped in a barn on Slatestone Road. Tad Tankard... read more