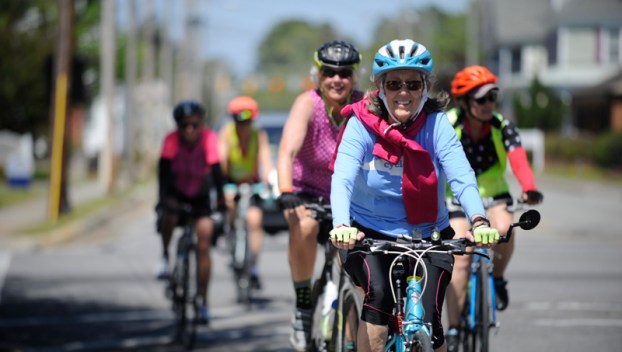 ON THE ROADS: A new bicycle plan for the county looks at projects large and small, increasing accessibility for those who use bikes as their primary way to get around, as well as joining the county to larger projects on the county, state and national level. Here, cyclists at a past CycleNC event in Washington pedal down Market Street. (Vail Stewart Rumley/Daily News)

The committee behind the Beaufort County Comprehensive Bicycle Plan is inviting the public to weigh in on future plans for cycling.

On Feb. 18, an open house will be held from 4 p.m. until 6 p.m. at Beaufort County Community College’s multipurpose room in Building 10, where plans will be on display and feedback on them will be sought.

For months, the committee of stakeholders, including public officials, county staff and private individuals, have been brainstorming ways to make each municipality in Beaufort County, and the county as a whole, an interconnected, bicycle-friendly community.

“It’s a coordinated and strategic effort to develop a safe, accessible and comfortable network of bicycle facilities,” said Jamie Heath, a planner with the Mid-East Commission. “We’ve tried to make sure we connected with municipalities and with all the unincorporated communities in the county.”

The committee looked at ways to connect people and places via bicycle by incorporating into the landscape a variety of options: bike lanes, buffered bicycle lanes, separate shared-use paths running adjacent to roads and greenways.

Part of the planning is oriented toward providing safer, more accessible routes. For example, adjacent to Market Street Extension in Washington, the plan calls for a shared-use path for both cyclists and pedestrians, running from 15th Street to the P.S. Jones Middle School and John Small Elementary — keeping bike riders and pedestrians separated from the heavier, faster traffic on that road.

In addition to the projects connecting local places, the plan also lays out projects that are larger in scope, joining Beaufort County to a greater cycling map. 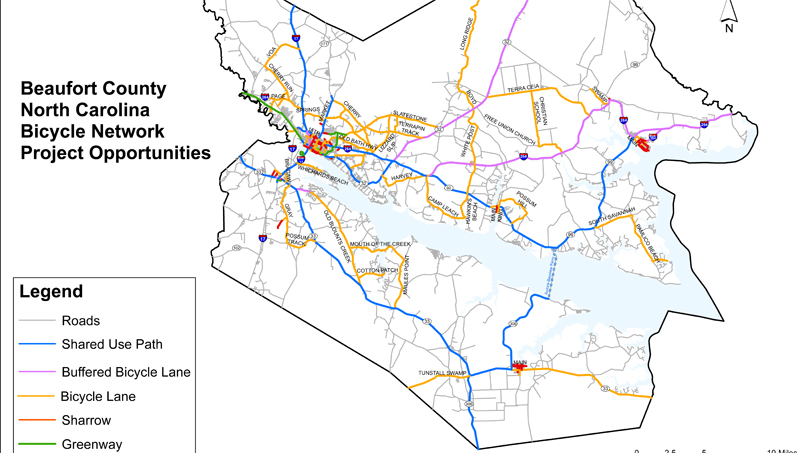 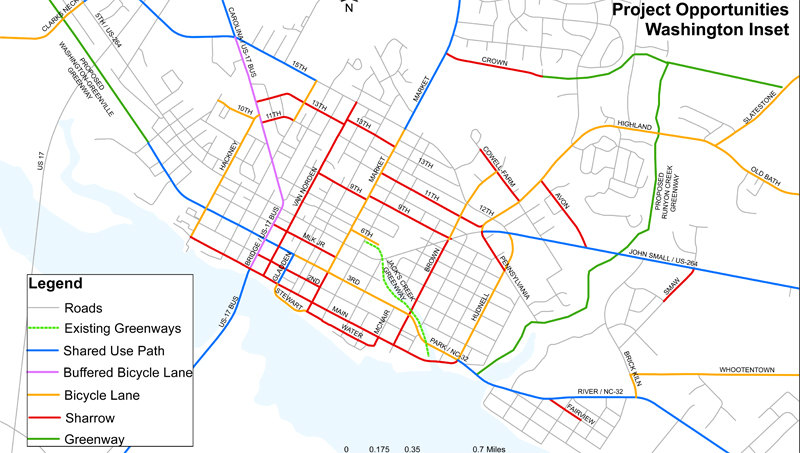 “One big thing that Washington also talked about doing, one of the bigger projects we’re looking at, is a Washington-to-Greenville greenway that runs along an abandoned rail corridor,” Heath said. “And Pitt County has a greenway planned that would kind of link up to that one, too.”

On an even larger scale, Beaufort County could become part of the East Coast Greenway, which runs from Maine to Florida. Currently, North Carolina’s share of that greenway runs through the Raleigh/Durham area, but East Coast Greenway organizers are looking to add an alternate coastal route through Greenville, into Beaufort County, incorporating the Bayview/Aurora ferry before heading south through New Bern.

“We’re trying to plan to accommodate that. That will be really huge for bicycle tourism. Bicycle tourism is already big, but that’s going to attract people internationally,” Heath said.

Heath said the committee has planned for the potential tourism boost, as well as what would benefit county residents who use bicycles as their main mode of transportation.

Those involved in the planning would like the public to provide input at the Feb. 18 open house, where proposed plans for each municipality, and the county, will be on display. Members of the steering committee and county officials also will be on hand to talk with visitors.

“They can just drop in at any time; it’s kind of informal. We’ll be there to chat with them,” Heath said. “They can make comments on the projects and recommend additional projects.”

Beaufort County’s Comprehensive Bicycle Plan comes courtesy of a NCDOT grant. In 2013, WalkBikeNC, a comprehensive statewide plan for improving bicycling and walking in North Carolina, was adopted by the N.C. Board of Transportation. According to the North Carolina Department of Transportation website, WalkBikeNC is “focused on five main principles — mobility, safety, health, the economy and the environment — WalkBikeNC looks at how investments into sidewalks, bike lanes and greenways benefit communities at relatively low costs and how bicycle and pedestrian accommodations are able to:

The plan also provides a synopsis of historic efforts, current trends and future strategies aimed at improving walking and bicycling conditions in the state.

Art and wildlife will pair up Saturday at the North Carolina Estuarium’s 18th-annual decoy-painting workshop. The event is part of... read more