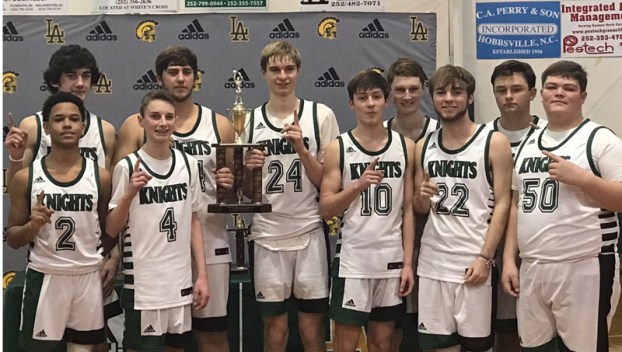 The Terra Ceia Knights continue to add to its trophy case with a decisive 51-33 win over Pungo Christian Academy in the Tarheel Independent Conference Championship on Saturday evening at Lawrence Academy.

The Knights’ defense was the story again. After ending the first quarter with a 16-13 lead, Terra Ceia didn’t allow more than 8 points in the remaining three frames.

Matt Van Staalduinen added 12 points for the Knights, while Duncan Edwards hit a couple of 3’s and had eight total points. Bryson Bunch came up big with seven rebounds and Alex Van Staalduinen grabbed six despite being in a bit of foul trouble on the evening.

Wilson Sawyer led the Raiders with 12 points, while Miller Lee added 10.
Despite the loss, Pungo’s Lee picked up an All-Conference selection, while Sawyer and Brent Benson collected All-Tournament honors.

Matt Van Staalduinen was honored with the TIC Conference Player-of-the-Year award, as well as All-Tournament.

Couch was honored with the TIC tournament MVP, and also made the All-Conference team.

While the Knights (25-3) came away from the TIC tournament championship, extending its winning streak to 22 consecutive games, the NCISAA didn’t do Terra Ceia any favors.

The Knights will be traveling two hours to Henderson to face Kerr-Vance Academy (11-9) in the first-round of the state playoffs. The winner of the contest will have to play No. 2 seeded Greenfield (27-6) in Wilson.

While both the Lady Knights and Lady Raiders fell short of the TIC title in the conference tournament, both will host playoff games Tuesday evening.

All playoff games will begin promptly at 6 p.m.

The Terra Ceia Knights boys’ basketball team has been on a tear over the past month. After defeating Pungo Christian... read more