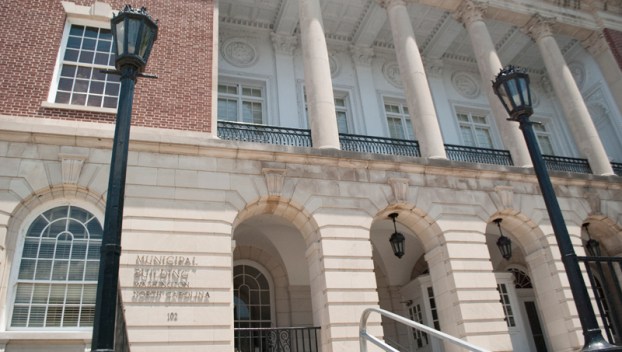 COMING SOON: License plate services will be available at the Washington Municipal Building starting in late April or early May, almost 11 months after the old License Plate Agency closed just a block away on Market Street. (Deborah Gardner)

The City of Washington is aiming to open a new license plate agency for Beaufort County in April or early May. Following debate by the Washington City Council Monday night, that office will be located in the lobby of the Washington Municipal building at the corner of Second and Market streets.

After weighing a variety of factors, including parking, logistics and cost to operate, the council voted 3-2 to place the office in the Municipal Building, as opposed to a proposed location on Brown Street.

“We’ll just have to look at some of the logistics of how the front counter is situated to make a couple more work stations to handle license tag exchanges,” Washington City Manager Jonathan Russell said. “Most of it will be behind the counter as far as the work flow and the logistics of where personnel are working. The waiting area would remain virtually unchanged.”

While operating at the municipal building will be less expensive in the long term and allow for easier management of the tag office, council members also had to weigh concerns about parking and congestion in the building’s front lobby, especially on peak days like pay day and at the end of the month.

The proposed location on Brown Street, meanwhile, stands across the street from First Church of Christ. Although the location provides much more parking, with additional spots available at the church, the cost to operate at the location would be higher.

Council members William Pitt, Betsy Kane and Virginia Finnerty voted to place the license plate agency in the Municipal Building, while councilmen Richard Brooks and Donald Sadler voted for the Brown Street location. In both cases, the possibility of adding space for the tag office at Washington’s forthcoming new police station would remain an option.

“That will be a very accessible site with plenty of parking, but a lot of that is yet to be determined on what the congestion level will be around city hall,” Russell said. “If it has any negative impact where we’re currently projecting it to operate, we’ll keep that in the conversation moving forward with plans for the new PD.”

As for remaining steps to getting the new agency up and running, Russell said there will be some additional training for staff that will run the agency, as well as site assessments on the part of the Division of Motor Vehicles. The end goal is to open the new agency by mid-April or early May, nearly a year after the previous agency closed on Market Street.

Renowned Ocracoke musicians and The Blind Center of North Carolina will team up next week for fundraiser that appeals to... read more