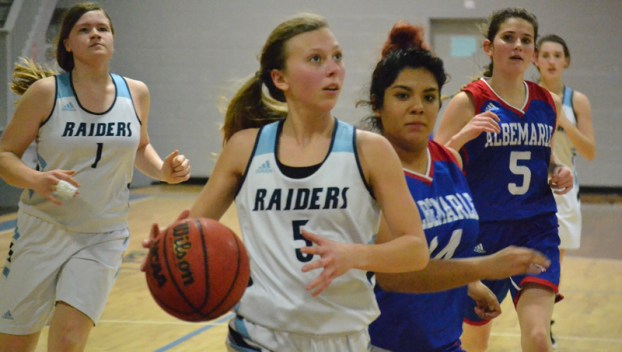 AHEAD OF THE PACK: Pungo Christian’s Riley Cutler races ahead of Albemarle defenders in the Lady Raiders’ win over the Lady Colts, 55-11, in the first round of the NCISAA state playoffs. (Mitchell Thomas / Daily News)

Pungo’s girls cruise past Albemarle in first round

A 21-1 run to start the game was enough for Pungo’s Lady Raiders to handle business in the first round of the NCISAA State playoffs Tuesday night. They went on to defeat Albemarle’s Lady Colts, 55-11.

Pungo (19-7) will have to travel to Neuse Christian Academy (10-12) in Raleigh for the second round of the state playoffs this evening.

Early on, Pungo asserted its dominance, as it did in the previous two meetings earlier this season.

The Lady Raiders ran a full-court defensive press very successfully that gave the Lady Colts fits and didn’t allow any easy baskets. Pungo ran various defensive schemes including a 1-3-1 zone and man-to-man. Head coach Melanie Eddleman said her team picked up on the defenses quickly, and running them to perfection will be key in a long tournament run.

“In the last week, we’ve learned several new offenses, a new press and new defenses, just trying to make it through tournaments,” Eddleman said. “We know in tournaments we’re going to face teams like Ridgecroft and Northeast, so we’ve watched a lot of tournament games, trying to prepare. I threw a new press at them the other day, and they ran it beautifully tonight. I literally wrote it down one time on the board, ran it one time in practice, and they picked up on it.”

A couple of Pungo’s jayvee girls were called up to play varsity to provide them with some depth. Abbey Cutler and Ashley Pippen made their debuts and produced quality minutes Tuesday night.

The scoring was spread out between seven different scorers, with freshman Reagan Stoop leading the way with 11 points. She also brought down seven rebounds and recorded six steals.

Emma Williams and Lauren Kellie Ricks each picked up 10 points. Williams saw the floor well throughout the course of the game, as she dished out seven assists on the night. Josie Hudnell had eight points, including a buzzer-beater 3-pointer before halftime. Morgan Burroughs and Riley Cutler scored six points each, and Pippen tallied four points to cap the scoring for the Lady Raiders. 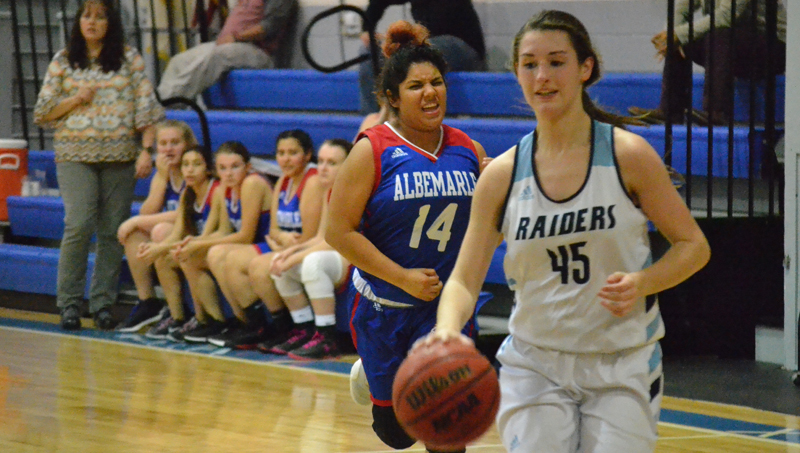 ROUND TWO: Pungo’s Emma Williams drives past Lady Colt defenders on Tuesday night, as the Raiders advance to round two of the NCISAA State playoffs. (MitchelL Thomas / Daily News)

Williams said she was happy with her team’s defensive performance, but that there’s still work to do heading into tonight’s game against Neuse Christian.

“We’ve been working on getting the ball inside to our big man,” Williams said. “We ran our defenses really well, tried a new press that worked, too. We get a lot of steals off of it. We just have to run our plays a little better and cut off the backside cutter because we’ve been struggling with that.”

The Lady Raiders will tip off against Neuse Christian tonight at 6 p.m.

A celebration of seniors was done right Tuesday evening at Washington High School. The girls and boys teams were sent... read more