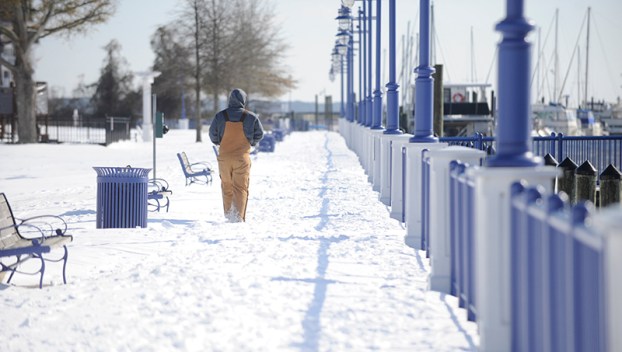 Though trees are budding and daffodils are blooming, they might be in for a chilly surprise Thursday night.

The National Weather Service Newport/Morehead City is warning eastern North Carolina might be getting a coating of snow Thursday night into Friday morning. According to lead meteorologist Casey Dail, an area of low pressure off the coast of North Carolina will bring in rain, which could potentially turn into a wintry mix or even an accumulation of snow.

“It could be light. We could get a little bit. It’s still too early to say about what amount,” Dail said.

The NWS website has a hazardous weather outlook posted for the region, though it clarifies that snow is a possibility and not yet a certainty: “There is still great uncertainty if any snow accumulations will occur. At this time, the most likely areas of seeing snow if it does occur will be for places away from the coast.”

Because some areas of Beaufort County saw a high of 80 degrees last Thursday, some might find the forecast of snow this Thursday farfetched, but Dail said the fluctuation in temperature is part of a larger pattern.

“We’ve just been in the pattern where we’ve had mostly ridging in the eastern part of the U.S., and we’ve been in this above-normal pattern, temperature-wise, this winter,” Dail said. “But we’re still in winter. It’s easy for everyone to forget since it’s such a mild, warm winter.”

Dail said the Climate Prediction Center outlook calls for more of the same over the next three months — above-normal temperatures and above-normal precipitation in eastern North Carolina — alternating with the more traditional winter weather.

“I would just tell folks to stay tuned to the weather forecast for the potential for snow on Thursday into Friday morning,” Dail said.