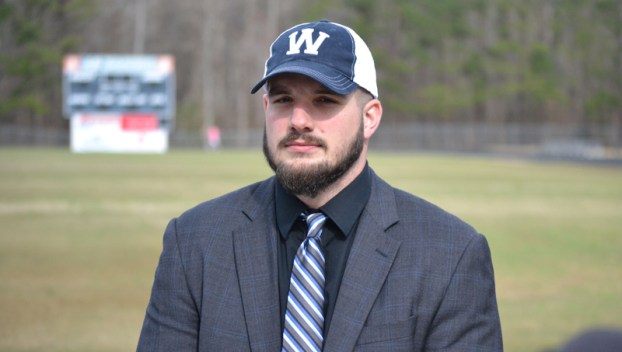 Owens introduced as head coach of the Washington Pam Pack

The search for the Pam Pack’s head football coach came to a final conclusion on Monday evening. The Perry Owens era at Washington High School has officially begun.

A press conference was held Tuesday morning inside of the Pam Pack’s field house to introduce Owens as the new head coach.

Owens was born and raised in eastern North Carolina. He played his high school football at John A. Holmes High School in Edenton, and played offensive line for the Aces. He went on to be a part of the first recruiting class in Old Dominion University’s football history in 2009.

After graduating, Owens returned to eastern North Carolina to start his coaching career at Edenton, then went on to Thomasville and West Montgomery High Schools in central North Carolina.

In 2017, he was hired to be offensive coordinator at Washington High School under then-head coach Jon Blank. Owens’ offenses the past three seasons have all ranked in the top-5 in Pam Pack school history, according to Owens.

“I appreciate the administration for recommending me for the job, and the board of education for approving me. It’s been a great three-year run here at Washington. Our kids have improved physically, mentally and socially. You’ve seen us rise from a program that didn’t really belong in the conference we were in, to a team that won our conference this past year,” Owens said in an opening statement. “This past season we broke 10 school records, and were 48th in the nation in our rushing attack. … We’re really excited as a staff, a community and as a program to be taking the next steps towards becoming a consistent winner in eastern North Carolina.”

There are a couple of hires Owens will have to make in order to complete his staff. Owens will continue to coordinate the offense, and Alex Heck will be the defensive coordinator for a second consecutive season.

“I look forward to returning our Beaufort County defensive player of the year, eight offensive starters and our stable of running backs,” Owens said. “Hayes Pippin will be ready to step in for the conference player of the year in Antwone Godley at quarterback, and defensively we return quite a bit. … I’m excited to see how our kids react to the new era.”

Owens said he mostly looks forward to watching the growth of the kids on his football team.

“This is the fourth year. We turned the program around from awful four years ago, to now conference champs. It’s the kids’ growth I look forward to most,” Owens said. “Now, it’s a question of consistency. Will we be able to win 9-10 ball games a year on a consistent level? Can we be conference champions on a consistent basis? I want to win every ball game I coach, but our staff will judge our own success on the amount of great fathers, husbands, leaders and productive members of society that we produce. At the end of the day, football is a tool that helped improve my life and many others’. … We are here to prepare our young men for life.”