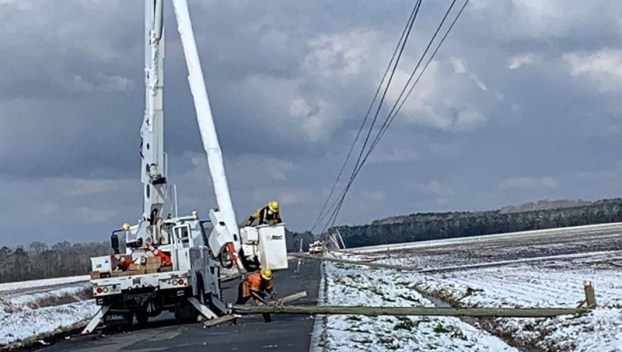 REPAIRS UNDERWAY: Tideland EMC crews work to repair broken poles on N.C. Highway 97. A total of 16 Tideland power poles were knocked down overnight. Power is expected to be restored by mid-afternoon for all Tideland and Duke Progress Energy customers. (Paul Spruill/Tideland EMC)

Sporadic and isolated power outage continue to affect Beaufort County residents headed into Friday afternoon, but most outages should be fixed by mid-afternoon, according to Tideland EMC and Duke Progress Energy.

According to Tideland EMC, nearly 800 members lost power early Friday on the Pantego circuit, and crews were quickly dispatched to address the outage. Because the EMC was able to back feed power to some areas, that number was down to around 259 still without power as of 7 a.m. Friday, but then the circuit went down again around 9 a.m.

According to the Tideland Facebook page, crews were working to repair 16 broken poles Friday morning. As of 12:30 p.m., approximately 313 people were without power, mostly in northeast Beaufort County. Tideland EMC Corporate Communications Manager Heidi Smith said most of the broken poles were due to heavy winds overnight, along with the weight of snow and ice on the lines.

“On the Howell’s Mill circuit, 72 members remain off,” the coop posted Friday morning. “Estimated time of restoration for those members is between 2 p.m. and 3 p.m. this afternoon. That is a 10-pole replacement job and we are being assisted by Lee Electrical in completing those repairs.”

Duke Energy Progress, meanwhile, showed eight customers without power between Chocowinity and Grimesland without power as of 12:30 p.m., with an estimated restoration time of 2:45 p.m. Larger outages were reported to the south near Wilmar.

The sun is out and the places where snow accumulated across the county is seeing a slow melt. But meteorologists... read more