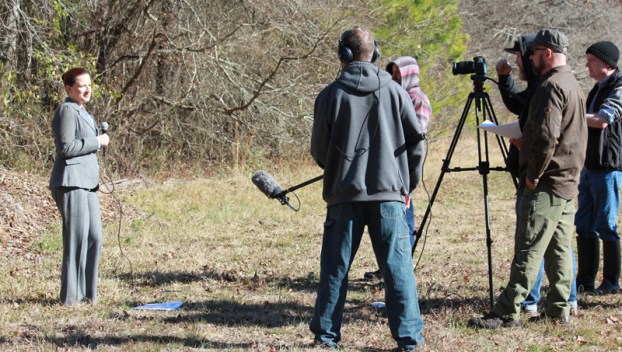 LIGHTS, CAMERA, ACTION: Haunted Pamlico, which operates under the umbrella of Alternative Stage, recently shot a film at Raised in a Barn Farm in Chocowinity. (Penny Taylor Carawan/Alternative Stage)

A new nonprofit is offering an alternative take on the arts in Beaufort County. The Washington-based Alternative Stage, which includes film company Haunted Pamlico, is now considered a pending nonprofit by the state of North Carolina.

According to a press release from the group, Alternative stage recently filed articles of incorporation with the North Carolina Secretary of State’s office and has also filed as a nonprofit with the Internal Revenue Service. The group can now begin fundraising efforts and is working towards filing paper work that will allow it to receive tax-deductible donations as a certified 501(c)3 nonprofit.

“My hopes are for this group to be an incubator for both new artists and all artists of any medium or walk of life to learn and grow in their art,” said Stuart Lannon, Alternative Stage president.

Formed in 2017, Alternative Stage has fostered everything from a visual-art show to dinner-theater performances for charity. The organization helped local nonprofits raise nearly $20,000 for charity in 2018.

The group has also offered original plays penned by local authors, including “Otis Loves Olive: A Radio Story.” The play was staged in 2018 as a fundraiser for Open Door Community Center, a Washington shelter for homeless women and children.

Future projects under discussion include comedy skits for area festivals and a new dinner-theater show.

“We’re providing a support group for expression and creation in many forms with the focus on the creative process at all levels,” Lannon said. “We’re not just being product-driven or putting out the same shows or art that people have seen a million times over. We’re offering a home for the seasoned artist or performer and for someone who has never been onstage or picked up a brush before.”

“I think we’re always on the lookout for new talent, including the next generation of people who will lead this effort,” added Alternative Stage board member Jonathan Clayborne. “We’re managing to recruit new people all the time, but we could always use more.”

Falling under the umbrella of Alternative Stage is Haunted Pamlico, which produces horror and suspense films and public Halloween events in Beaufort County and elsewhere. Haunted Pamlico is organizing its second-annual Carnival of Darkness film festival, which is set for October. The group is also co-producing J.B. Beverley’s film, “The Killer Among Us,” with Romero Pictures and Rebel Roots Productions.

“It is our hope that Alternative Stage will offer a community for all artists in our area, from all walks of life,” said Leah Moore, Alternative Stage treasurer. “We aim to nurture all levels of talent and all genres of artistry.”

“This is a big step for us,” Clayborne said. “We’re hoping people will respond to this effort.”

Sound Rivers to sign on with Clean Water Act lawsuit

Sound Rivers has stated its intention to join forces with conservation groups across the U.S. to fight the rollbacks the... read more