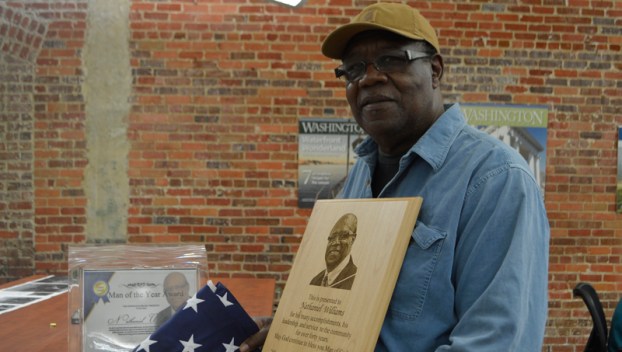 MAN OF THE YEAR: Nathaniel Williams holds a wooden plaque honoring his years of service to the community, along with an American flag flown over the state capital on his birthday and a Man of the Year award from his family. (Matt Debnam/Daily News)

CHOCOWINITY — When Chocowinity found itself short a town commissioner in 2018, Nathaniel Williams answered the call to service. It’s been a theme during the course of his life, both in his professional career and as a minister.

This past weekend, during an event to honor his life of service, Williams was bestowed a number of awards, including a proclamation from North Carolina General Assembly recognizing his service, a letter from Congressman Greg Murphy, a proclamation from Washington Mayor Mac Hodges recognizing him as “Man of the Year” and an American flag flown over the state capital on his birthday.

Professionally, Williams has been a successful entrepreneur for more than 40 years, operating Williams’ Pressure Cleaning and Williams Pest Control. Weathering economic hard times, he’s managed to keep both businesses going, even finding time to help those in need.

“When we had the floods and whatnot, he helped businesses and churches renovate their buildings and get up and running quickly at little to no cost,” said Jeff Windley, Williams’ son.

If running two businesses wasn’t enough, Williams also finds joy as the pastor of two churches, People’s Faith Church of God in Christ, in Roper, and Amazing Grace COGIC in Chocowinity. He’s built a number of parish houses in town, operates a food pantry and is also working to bring a food bank and soup kitchen to town, as well as an afterschool program.

“The task itself is rewarding,” Williams said of being a pastor. “First of all being a child of God, then trying to help the community, whether it’s down in Roper or Chocowinity, or just people that you meet. I just want to introduce them to the Lord the best way I can.”

Though his family describes Williams as a humble man, his service has touched many lives. It’s his continuing goal to be an example to others and to help uplift other people when he can. As president of the Chocowinity Sanitation Department, it’s not uncommon to see him picking up trash on the side of the road, all to make his community a better place.

“He’s built a couple of parish houses, and he’s bringing a soup kitchen to Chocowinity,” N.C. Representative Keith Kidwell said. “He’s done a lot of good in the community, and he continues to seek to do so. As a representative, I think it’s appropriate that we honor those people and have them recognized to hopefully give other people an incentive to do likewise and help others.”

Turnout started slow in Beaufort County, but voting has picked up the pace this week as One-stop voting comes to... read more