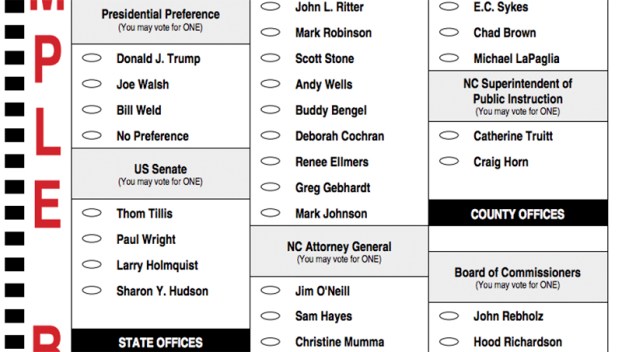 Turnout started slow in Beaufort County, but voting has picked up the pace this week as One-stop voting comes to a close ahead of the March 3 primary.

“The first week was a little low,” said Kellie Hopkins, executive director of the Beaufort County Board of Elections. “I was wondering if we were just going to have an extremely low turnout for this primary, but this week, it has picked up. So we should be on track to have a normal turnout for a primary.”

With four days remaining for early voting and the primary next week, as of Monday evening, 1,269 Beaufort County voters had made it to the polls to cast their ballots. The numbers will likely increase as Aurora and Belhaven satellite sites open Thursday, Friday and Saturday.

“We’ll be open 8 to 7:30 Thursday and Friday and then Saturday from 8 to 3, and that will be the last day to vote early,” Hopkins said.

Hopkins said, generally speaking, even presidential primaries draw a lower voter turnout. In 2016, when both Democrats and Republicans had multiple presidential candidates, about 38% of voters registered in Beaufort County voted in the primary. However, in the general election, nearly double that number, 72%, voted on Election Day 2016.

“When you go to the general election, it jumps quite a bit,” Hopkins said. “I don’t know if it’s the media that drives it — that there’s so much media in the fall about the election, prompting people to get out and vote.”

Republicans voting in the primary will select their favored candidate for president and the U.S. Senate, and the following North Carolina races: governor, lieutenant governor, attorney general, auditor, commissioner of insurance, commissioner of labor, secretary of state and superintendent of public instruction. Republicans will also select a candidate to move on to the general election in November from a slate of seven Beaufort County Board of Commissioners candidates.

Democrats voting in the primary will select their favored candidate for president and U.S. Senate, as well as the following North Carolina races: governor, lieutenant governor, auditor, commissioner of agriculture, superintendent of public instruction and treasurer.

Unaffiliated voters may select which party’s primary ballot they wish to vote. Voters are not required to produce a photo ID to vote in this primary.

Vidant Beaufort Hospital is teaming up with NC MedAssist this week to bring a Mobile Free Pharmacy to Washington. Friday,... read more