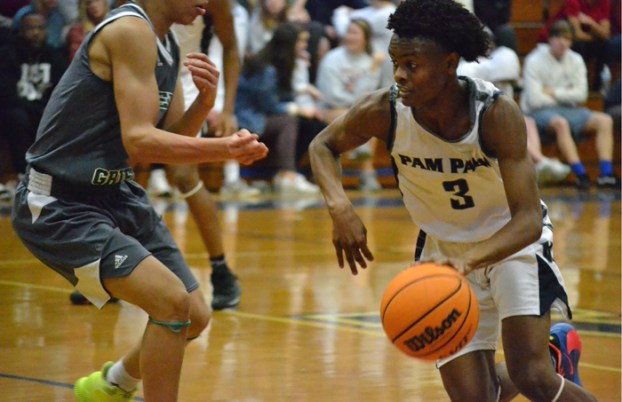 FINDING SPACE: Washington's Rashod Smith gets around an Ayden-Grifton defender in the first round of the 2-A Eastern Carolina Conference tournament last week. (Mitchell Thomas / Daily News)

Washington, Southside prepare for second round

After Tuesday night’s first-round contests, the Washington Pam Pack’s boys’ basketball team and the Southside girls’ team both came away with wins over their first round opponents in the NCHSAA state tournament.

The Lady Seahawks came away with a dominant victory on the road, defeating Northampton County, 56-39. 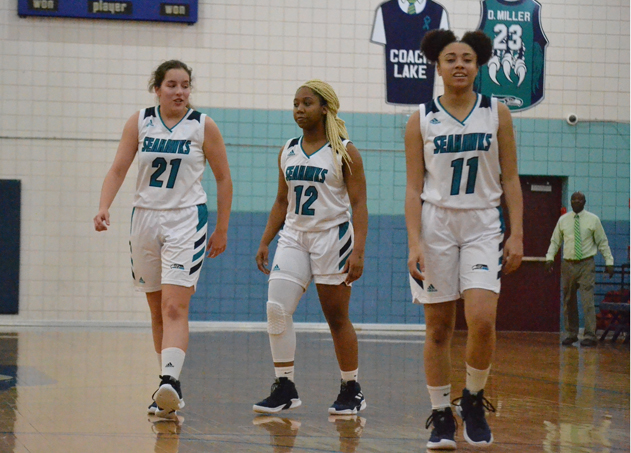 WALKING TALL: Southside’s Sarah Petty (left) Laquisha Woolard (middle) and Shantel Cannon (right) walk onto the court after a timeout during the Seahawks’ win over Perquimans earlier this season. Southside will travel to Weldon for a second round matchup in the NCHSAA tournament on Thursday evening. (Mitchell Thomas / Daily News)

Freshman Ka’Nyah O’Neal led the Seahawks in scoring with 21, while Jasmine Blango added 15 and Laquisha Woolard had 13.

The Seahawks won its 18th game of the season, setting up a second-round matchup with a tough Weldon (23-1) squad. The Lady Chargers’ only loss this season came to Knightdale in the second game of the season. Currently, Weldon is on a 22-game win streak.

Weldon has been impressive the last few years, and have the offensive firepower to make another deep run in this year’s tournament. They have a lot of depth, and can turn to various playmakers throughout the game.

O’Neal and the Seahawk defense will have to perform at the top of its game to stick around with the Lady Chargers, but if they do, anything can happen.

If Blango’s outside shot is working, Miasia McCall and Sarah Petty are bringing down rebounds, Woolard is having success driving to the basket and O’Neal is running in transition, the Seahawks can beat anybody in the playoff field. It’s been a long time since the Chargers lost. These Seahawks will be coming in knowing how to compete with the top teams in the state, as they’ve played the defending state champions, Pamlico County, twice this season.

The Pam Pack will go to battle with the defending state champions for a second time this season at Farmville Central (25-2).

These teams faced off on Dec. 17 of this season. Washington and Farmville were tied with five minutes remaining in the contest, but the Jaguars stepped on the accelerator and won, 83-66. The Pam Pack possessed a big first half lead, but it was squandered in the second half.

The Jaguars have a lot of length that is going to be a tough match for Washington on Thursday night. However, the Pam Pack have faced plenty of length within the 2-A Eastern Carolina Conference throughout the season.

The Pam Pack’s offense can score points in bunches, and have proven they can defend at a high level when they need it most.

Washington has some depth, but top scorers Omarion Blount, Rashod Smith, Jamauri Bryant and Terry Moore will need to play their best basketball to stick around with a Farmville offense averaging 82.5 points per game.

Washington has what it takes to walk into the Jaguars’ building and walk away with a win. However, there won’t be much room for error. They’ll be able to play loose with nothing to lose, and that’s dangerous for Farmville Central.

After winning the first playoff game in a couple of decades, anything is possible for the Pam Pack. Washington is a confident ball club right now. They’ve won seven of their last nine contests, and can matchup with anybody in the 32-team field that remains.

If the Pam Pack can hold the Jaguars to under 75 points, they give themselves a great chance to win on Thursday night.

The Pam Pack fed off of an electric home crowd and picked up a playoff victory for the first time... read more