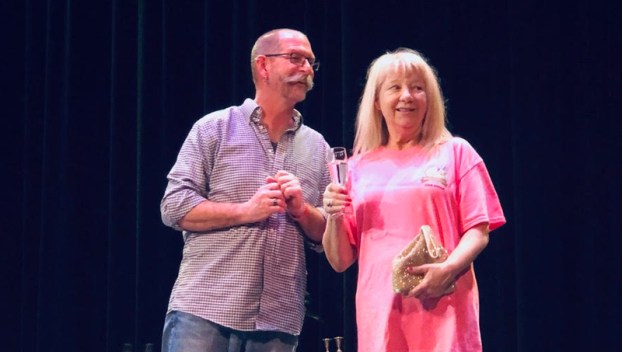 By Arts of the Pamlico

What happens when six people receive a mysterious invitation to a dinner party? You end up with laughter, tears and a deeper insight about love and marriage. Neil Simon’s “The Dinner Party” hits the stage at the Historic Turnage Theatre this Saturday night at 7:30 p.m. and Sunday afternoon at 3 p.m., presented by the AOP Players.

In this play, Simon took a departure from his standard comedy formula and set out to prove that comedy can have real moments. In 2000, Simon told the New York Times that he “had the concept of creating a farce up to a certain point, and then instead of continuing the farce, to make a turn to where it becomes quite serious. [He] wanted to break the concept that farces can never get real, even for a minute.” It is up to the audience to decide if he was successful or not.

This production sees the return of local stage favorites, Thad Aley, Pamela Anderson, Will Aley, Johnathan Chavez, and Erin Staebell, all of whom were last seen in the AOP Players’ production of “Greater Tuna” last fall. Joining them is newcomer to the Turnage stage, Edwina Barrera. The production is directed by ECU professor, Natalie Stewart, with assistance from local theatre teacher, Sean Jeffries. Costume Designer is Arts of the Pamlico Artistic Director, Jeffery Phipps.

“I’m very excited to be working with Natalie Stewart, Sean Jeffries, and Jeffery Phipps,” said cast member Pamela Anderson. “The cast is fantastic and it would be a shame if people didn’t come out and see this production.”

Tickets are $10 cash and check or $12 via PayPal or credit card, available now and at the door. The house will open 30 minutes prior to show time and concessions will be available.

Tickets available via PayPal at www.artsofthepamlico.org or at the theatre, Friday from 11 a.m. to 6 p.m. and Saturday from 10 a.m. to 2 p.m., and 1 hour prior to showtime.