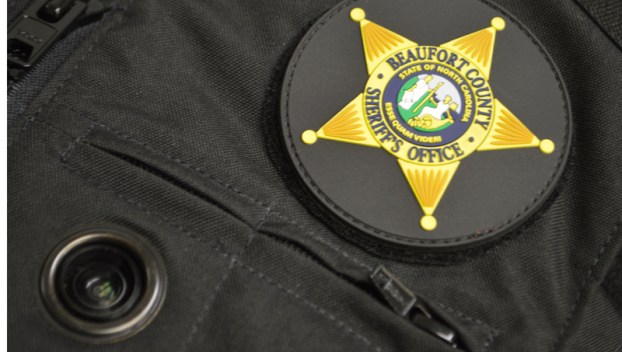 FUNCTION AND FORM: The lens peaking out of this Beaufort County Sheriff's Office vest is mounted to a modified cell phone which acts as a body camera for patrol deputies and school resource officers. (Matt Debnam/Daily News)

New body and in-car cameras are now standard equipment for patrol deputies and school resource officers with the Beaufort County Sheriff’s Office. The agency announced the rollout of the technology Friday, which will provide a new tool for officer safety, accountability and transparency.

With the rollout of the cameras at the BCSO, the agency becomes the first in the state to utilize the Bodyworn camera system. They’re powerful tools for law enforcement, all wrapped inside repurposed cell phones that tuck discreetly inside deputies’ vests, according to the sheriff’s office.

Beaufort County Sheriff Ernie Coleman says as the technology has evolved during his 40-year career, body cameras and video recordings have almost become an expectation.

“In the last 10 years, if you have a jury trial, a lot of times, juries sit there waiting for the video to come up,” Coleman said. “They’re pretty much expecting a video, and if it’s not there, it’s human nature to question the validity of the officer’s word.”

Ultimately, however, the technology will ensure an unbiased, factual account of events as they transpired.

The cameras have all been programmed to activate automatically under certain circumstances, based on the BCSO’s policies. For instance, GPS technology in the devices triggers activation when deputies arrive on scene at a call. If a deputy exceeds 75 miles an hour in a patrol car or uses blue lights, the cameras come on.

“It’s not a supervisory feature to put your thumb on an officer, but more of a feature for training and safety for the officer and the public, and I really like that,” Coleman said.

At the sound of a gunshot, the cameras are activated as well, saving the 30 seconds prior to the instant that shot is fired. An officer-down situation, indicated by an internal gyroscope, alerts emergency communications and other deputies of the fallen individual’s position, allowing for quick, potentially life-saving action. The modified phones can also allow deputies to receive pictures of suspects for whom they should be on the look out. 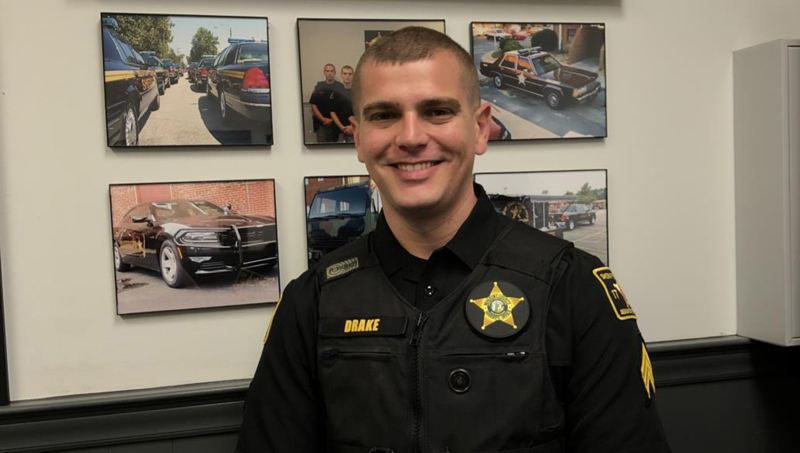 DISCRETE: Beaufort County Sheriff’s Office Sgt. Nathan Drake models a modified vest that conceals a Bodyworn camera inside. The cameras are equipped with a variety of high-tech features that will allow deputies to stay safer on the job. (BCSO)

For the SROs who protect local schools, the cameras could also save lives in an active shooter situation. Connecting to the school’s Wi-Fi network, the cameras can feed a live stream of events inside the building directly to communications and command staff on the outside.

“This is so critical to an active shooter situation, to have information of where that person is and how it’s going from that live stream,” Coleman said. “I just think that’s absolutely fantastic for the safety of the public.”

When deputies pull into the parking lot at the BCSO, any recorded footage from their body and car cameras is automatically uploaded to a cloud server, where it is maintained for at least 90 days, or longer if necessary. The playback function also allows BCSO personnel to blur faces if needed in the event of a public release.

Coleman said he is also considering adding an activation trigger when deputies draw their weapons as well, a possibility with the new technology.

“When you compare what (deputies) now have, and the technology we’ve had in the past and what some surrounding agencies are using, it truly goes unmatched,” said BCSO Systems Administrator Joseph Knox. “It allows not only officers to have a higher level of officer safety, but it allows the command staff and the sheriff to have oversight and have the videos there when we need them.”

The Beaufort County Board of Commissioners unanimously approved a resolution to outfit the BCSO with the Bodyworn camera system in November at a total cost of $278,837.03, an amount that includes maintenance, support and replacement if necessary. The total sum is set to be paid out of installments of $59,600 per year during the course of five years, with 0% interest.

“I appreciate the county commissioners looking at this,” Coleman said. “I think they know, from looking at it nationwide and statewide, th