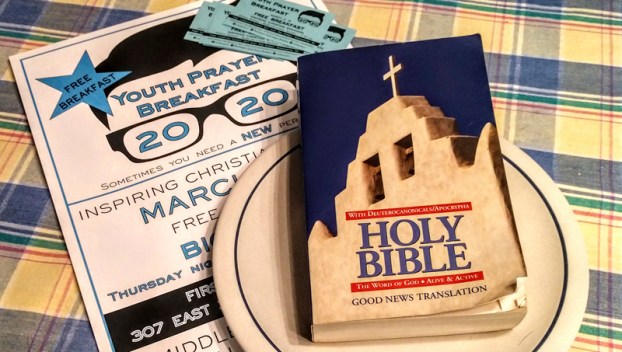 DAY OF PRAYER: This year’s Youth Prayer Breakfast features a new session as well as a favorite speaker invited back to address local students. (Karen Thiel)

‘Spiritual recharge’ on the menu for this week

Eleven years of uplifting encouragement will be added to, this coming week, with four new speakers, a fifth returning by popular demand and a new feature at the 12th-annual Youth Prayer Breakfast.

“We try to find an array of speakers, not just celebrities but overcomers, with whom these kids can identify. It’s such a big thing for them to have adults in their lives who care about them,” Martin said.

This year’s event is titled “Sometimes You Need A New Perspective.” Monday’s speaker is Stacy Henning, an East Carolina University graduate and area Wyldlife director. Tuesday features ECU football Chaplain Marcus Anderson. Wednesday’s guest is Duke seminarian and former Washington High School athlete Jeff Bennett. Thursday spotlights Daniel Ritchie, who was born without arms and overcame the effects of being told he was a “hopeless mistake and woefully inefficient to lead a full life.” Returning on Friday will be Louisiana State University All-American soccer player Mo Isom. Her story includes not only her international athletic fame but a near-fatal car crash, her father’s suicide and the harrowing spiritual journey that led her back to Jesus.

Isom is also featured speaker at a first-ever Thursday night session from 6 to 7:30 p.m., which is free and includes a “light supper.” Open to students and parents alike, her topic will be “Intimacy, Identity and the Conversations We Can’t Ignore.”

Oscar Rodriguez and Dysonique Spencer agree. Graduates of the Class of 2017, each man said past Youth Prayer Breakfast’s speakers and event organizers have changed their lives.

“I didn’t focus on God in middle school … I just went to have a really good time,” Rodriguez said. But the messages stuck, and he was baptized in his junior year after making a commitment to Jesus. He said his faith changed his entire family so much that he not only led his mom to salvation, but personally baptized her in 2018.

“Not a lot of people get to do that,” said Rodriguez, who owns Pamlico Rental and Moving.

Spencer said that event speakers — and steady encouragement from substitute teacher and Young Life volunteer Kevin Clancy — turned him from a “bad kid, the class clown” to the reliable employee and criminal justice student he is today.

“It was really Mr. Clancy, because he told me I should definitely go (to the prayer breakfast),” Spencer said. “I was gonna give him a hard time, but he said ‘I understand what you’re going through.’ I got the same feeling there that Mr. Clancy gave me, but from strangers. It was a place of peace and love at that time in my life.”

The event will be held at First Christian Church, 307 E. Third St, in Washington. Sessions are at 6:30 a.m. for middle school students and 7:30 a.m. for high schoolers. Students need to arrive via their own transportation, but rides back to school will be provided to P.S. Jones, Chocowinity Middle, Bath Elementary, Washington Montessori Public Charter School, Washington High School and Beaufort County Early College High School. Permission slips can be found at www.youthprayerbreakfast.com. For more information, call 252-943-8184.

Former Washington resident charged with assault with intent to kill

A former resident of Washington is being held on a $1 million bond after assaulting two people in Pitt County... read more