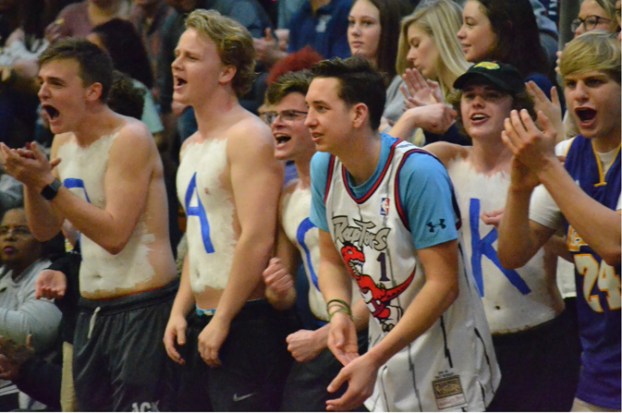 THE WINNING FEELING: Washington’s student section gets excited after one of the Pam Pack basketball players made a shot in a game against Greene Central on Tuesday night in the first round of the NCHSAA playoffs. (Mitchell Thomas / Daily News)

Since the early part of November, basketball and wrestling have filled gyms throughout Beaufort County and beyond. There have been ups, downs and everything in between for many teams, and some created new beginnings.

With Washington’s recent wrestling success winning the past six 2-A Eastern Carolina Conference titles and making appearances in the state duals, it’s important for kids throughout the county to get the opportunity to wrestle if they so choose.

Basketball season seemed to have come and gone in a flash. Seeing the growth of all the basketball teams in the area from the beginning of their seasons to the end was quite an experience.

When kids start believing in something, it changes their demeanor, their effort level and effects how they play for the better.

There are some great basketball coaches in Beaufort County. Being able to speak to them all on a personal level and getting to know all the players has been really special.

Few things are quite like a basketball game with a packed gym in a tight game. The student sections hyping up one of their own players after a play, and getting into the heads of an opponent are what make high school basketball so great.

This season, history unfolded for the Pam Pack. The boys’ basketball team broke down barriers that no other team in the previous couple of decades has been able to accomplish. Students stormed the court after the first playoff victory in a very long time, and it was a beautiful thing.

A gym full of pure happiness and euphoria is like no other place on the planet. The excitement, the smiles and the outpour of appreciation to the players for their accomplishments is what sports are all about.

While we have to wait another nine months on the beginning of next year’s basketball season, this year was filled with unforgettable moments.

The best thing about sports is that it brings people together. No matter what you believe outside of the gym doors or stadium gates, everyone is a part of the same game, with the same goal — winning.

A valiant effort wasn’t enough to prolong the Washington Pam Pack’s basketball season, as they fell to the 2-A defending... read more