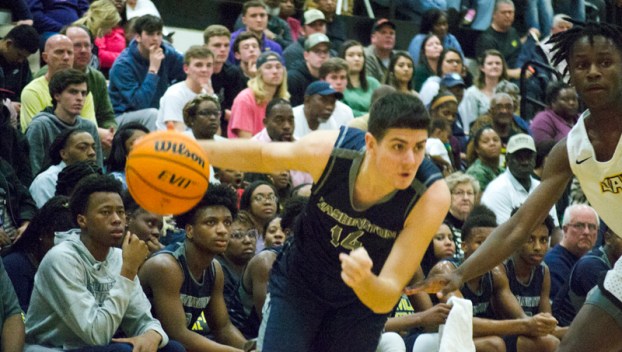 FINAL HOORAH: Washington’s senior guard Reese Gaskins drives towards the basket against Farmville Central in the final game of his high school career. The Pam Pack’s historic season came to an end in the second round of the NCHSAA playoffs Thursday night. (Mitchell Thomas / Daily News)

A valiant effort wasn’t enough to prolong the Washington Pam Pack’s basketball season, as they fell to the 2-A defending state champions, Farmville Central, 98-83, Thursday night.

While the Pam Pack had chances early on to pull ahead of the Jaguars, Farmville slithered its way in between Washington’s zone and drained open shots.

Midway through the second quarter, the Pam Pack hopped on a 12-2 run sparked by an alley-oop from Rashod Smith to Justin Powell. The slam got the Washington crowd on its feet, and they got even louder after Omarion Blount splashed a corner 3-pointer on the next possession.

In the second half, Farmville continued to push the envelope. They extended their lead to as many as 30 points before Washington started to get some shots to fall. Jamauri Bryant’s 12 fourth quarter points helped the Pam Pack make a late fourth quarter push, but it was too little, too late.

Kash Godley, Reese Gaskins, Smith and Powell all played their final games wearing “Pam Pack” across their chests. Godley said that he will never forget his four years playing with his friends.

“Man, my favorite memory from my last four years was probably my sophomore year. We were nice. But, I love my teammates, we had fun with every game we played, win or loss,” Godley said. “It meant a lot to be apart of this season, because we did some stuff that hadn’t happened in a long time. For us to do it, and for me to be a part of it, it means a lot — I’ll never forget it.”

First-year head coach David Allewalt talked about his team’s resiliency throughout the course of the season and was very proud of how they competed.

“From where this program has been — I’ve done my research — I know the history of this school. It was one of the reasons I was excited about taking this job. I felt confident in my ability to restore some things. Restoring things doesn’t get measured by the wins and losses on the court, it’s about the culture all the way around, how these young men act on and off the floor,” Allewalt said. “At the end of the day, I’m super proud of all these guys. … For them to buy in and work as hard as they did for us, their school and their community, this was a special. The Pack is back, man.”

Spring is the season for the diamond. Last year, three softball teams from Beaufort County made a trip to the... read more