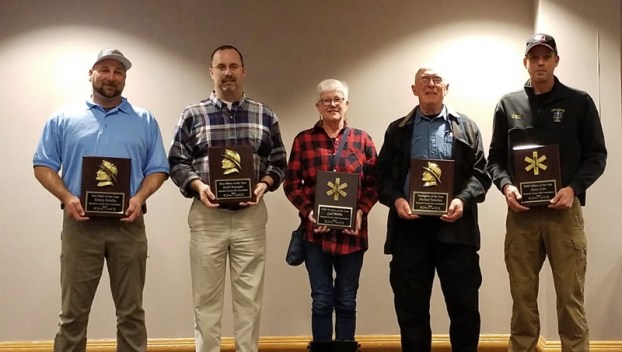 Every day, the dedicated men and women of Beaufort County’s fire and rescue services give of themselves to ensure the safety of others. This past Saturday, the annual Beaufort County Fire and EMS Associations Banquet at Beaufort County Community College offered an opportunity to recognize some of the best and brightest first responders in the county.

“A lot of times, for what they do, they go unnoticed or are very much behind the scenes,” said Beaufort County Fire Association President Derrick Myers. “This shows our appreciation for all they give to Beaufort County.”

Among those recognized for their dedication were:

In addition to those annual awards, Beaufort County Emergency Services also recognized a number of individuals and departments whose actions during the past year saved a life locally.

“These were for departments that initiated CPR and these patients are actually living productive lives today,” Myers said.

The following first responders and departments were recognized for saving lives in Beaufort County this past year at the following locations:

Also recognized were individuals who participated in significant amounts of training during the past year.

Beaufort County Emergency Services Director Carnie Hedgepeth said this year’s award winners represented a great diversity of roles in emergency services, from those who are first on the scene at emergencies to others who work in the background to support departments through grant writing and other forms of service.

“It’s always great to be able to recognize those that volunteer and put other people before themselves,” Hedgepeth said. “It just shows the heart and makeup of emergency services in general — that’s fire, rescue, EMS and law enforcement — of just having a servant’s heart and trying to make a real difference. We’re very proud of the accomplishments of those who were recognized.”