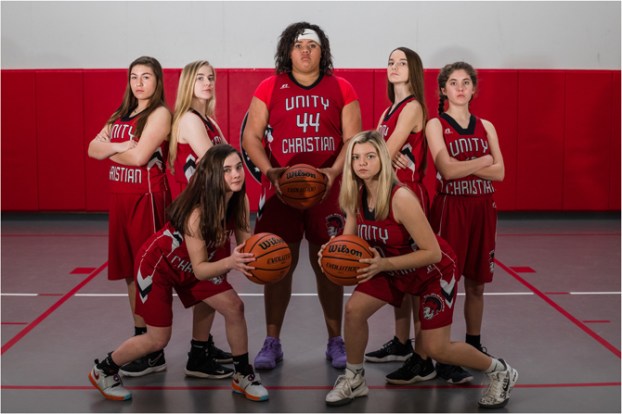 CHOCOWINITY — It’s not often basketball teams waltz through their schedules without a single hiccup. The Unity Christian Academy girls’ basketball team finished its regular season with a 21-0 record, including a couple of tournament championships in the process. They will compete at a national tournament this weekend in Dayton, Tennessee.

The season started out with a few wins over Epiphany, New Bern Christian Academy and Gramercy Christian, but it wasn’t until they played in Northside’s tip-off tournament that people started to understand that the Lady Warriors are the real deal.

They defeated East Carteret in the first day of the tournament, then defeated the Lady Panthers of Northside in the championship game, 47-43.

They hoisted the championship plaque for a second time after going to Columbia for a holiday tournament, defeating the Lady Wildcats, 49-14, to collect another first-place award.

On Jan. 31, they had a battle of undefeated teams against Living Water Christian and showed what they were made of. They won in overtime, 40-35, serving LWCA its first and only loss of the season.

After finishing off the season with a seven-point victory over Trinity Christian, they stood tall with a perfect 21-0 record. The Lady Warriors outscored their opponents this season, 995-503.

Sophomore point guard Paige Sawyer said she was really proud of her team this season, and gives God all the glory.

“It was an amazing and great feeling. We worked really hard, and the results showed that. I was really glad we got to compete against some local public schools because it shows that just because we are a small school doesn’t mean we can’t be successful. I love playing good teams because it pushes us to play better ball,” Sawyer said. “The key to our success was communication and dedication. When we talk and move the ball around, we play amazing. We also had practice almost every day of the week and sometimes Saturdays. We had to be dedicated to each other and the game.”

Now, they head to Dayton for the National Association of Christian Athletes’ basketball tournament. The event showcases some of the best Christian school basketball teams in the country.

“Obviously, one of our goals is to win, but I would definitely say we just want to go and play our best and build as a team. If we play to our intensity and skill level, we can win it,” Sawyer said.

The rest of the Lady Warriors — Kipper Case, Kirbi Case, Shy Brokenborough, Catherine Cutler, Meagan Jensen and Carley Harbridge — will all make the trip to Dayton, as well as coach Will Chancellor and Alan Carawan.

“This tournament is a way to honor our Lady Warriors’ season of hard work, chemistry and resolve. Twenty-one times this year they have laced up and proven that they are not just ordinary. We wanted a chance for them to be champions,” Chancellor said. “We have the same three goals for basketball as we do for life: One, to showcase who we are and what we represent. Two, to put ourselves in situations where we can be tested and God be glorified. Three, for good to be recognized as good, and honor be given to that which is worthy.”

Head coach of the regular season Harvey Case won’t be able to make the trip with his girls’ squad, but wishes them the best in their journey.

“These girls love to compete. They’re mentally tough, and they love being challenged. We try to get better every practice and give great effort,” Harvey Case said. “We had some size in the middle, strong wing players, quickness at our guard spots, good inside post play and most everybody can play good defense. We just had some versatility at different points. … We always came to play tough-nosed defense, and that was really the key to our year.”

There are no seniors on the Lady Warriors squad this season, and they return all of their starters next year.

“This tournament will be good for them. They’re young and being in a different setting will help them. They’re going into a place with teams coming from all over the country, a big crowd. It’ll be really noisy and every team out there is probably pretty good. But what I expect is that they’ll compete. No matter what happens, they’ll continue to go at it,” Harvey Case continued.

The Lady Warriors’ first game will be against Carroll Christian of Maryland at 9:30 a.m. Wednesday morning inside Rhea Central’s gymnasium in Dayton.

The news of Kobe Bryant’s passing along with his daughter Gianna Bryant and seven others shook the sports world to... read more