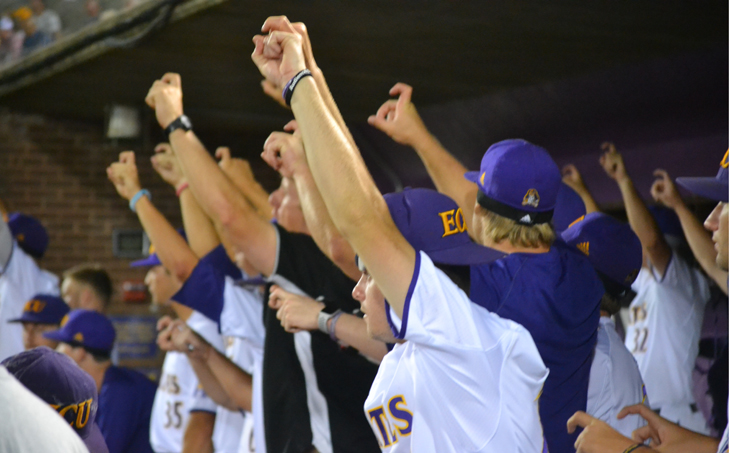 HOOKS UP: East Carolina’s baseball team hold up the rally hooks during the Pirates’ NCAA Regional game against Quinnipiac in Greenville last year. The Pirates are moving one of its baseball games to Grainger Stadium in Kinston, home of the Wood Ducks. (Mitchell Thomas / Daily News)

KINSTON — The Down East Wood Ducks announced Wednesday that they will host a collegiate baseball game between East Carolina University and the University of North Carolina Wilmington on Tuesday, April 14. The game will be played at Grainger Stadium in Kinston. Gates will open at 5 p.m., with first pitch scheduled for 6:30 p.m. Grainger Stadium parking is free for the contest, just as it is for all Wood Ducks games.

The Wood Ducks had originally been scheduled to play host to the Fayetteville Woodpeckers in a game on April 14, but received permission from the Carolina League to reschedule that game as part of a double-header to be played on Monday, April 13.

“We are really excited, and thank ECU Athletics for giving us the opportunity to host the game. We encourage everyone to purchase their tickets early, as we expect a high demand for the tickets,” said Wood Ducks Vice President Wade Howell.  “We are looking forward to a successful game and building on the partnership with both ECU and UNCW athletics.”

Tickets for the game are on sale now and can be purchased online at www.woodducksbaseball.com, by calling (252) 686-5172 or in the Grainger Stadium front office Monday through Friday from 9 a.m. to 5 p.m. Grandstand reserve and general admission tickets are $11. Current Wood Ducks box seat holders will have the opportunity to purchase their box seats for the game, but it is expected a small number of boxes will be available for the game. Nine-seat boxes are $100, six-seat boxes are $70, and five-seat boxes are $55. Anyone interested in purchasing box seats can contact Jon Clemmons at jclemmons@woodducksbaseball.com, calling him at 252-686-5171 or visiting the Wood Ducks front office Monday through Friday from 9 a.m. to 5 p.m.

Media members wishing to cover the game must submit a credential request to Matt Present at mpresent@woodducksbaseball.com by April 7.