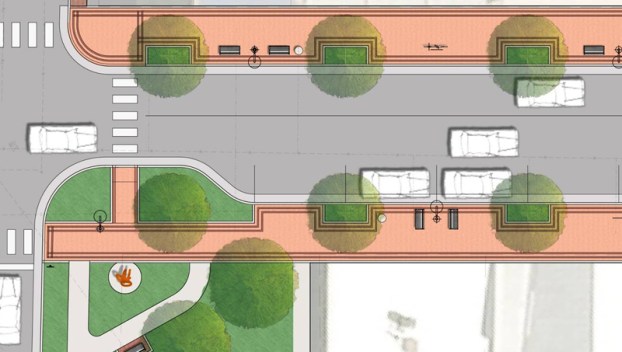 IMPROVEMENTS COMING: Stretching between Gladden to Market streets, the city’s streetscape project will replace and widen sidewalks, alter landscaping and parking and improve utilities on Main Street. The Washington City Council will weigh a decision on the project’s funding Monday, with an anticipated start date of April 1. (Rivers and Associates)

Monday night, the Washington City Council will make a multi-million funding decision for a downtown streetscape project that has been three years in the making.

Developed by Rivers and Associates, the master streetscape plan for downtown Washington will involve reconfiguring sidewalks and landscaping on Main Street from Gladden to Market streets, with the goal of making downtown more appealing and pedestrian friendly.

Last week, the city opened six bids for the project, with the highest coming in at $4.8 million. The lowest bid was from B.E. Singleton and Sons at $3,415,340.96, and council will vote on accepting that bid during its regular meeting Monday. Once that final decision is made, city officials hope to start the project in April.

“It would move forward rather quickly,” said City Manager Jonathan Russell. “We would like to start around April 1 and we’re looking at about a six-month construction period. The current bid documents have a construction deadline of Nov. 1.”

Russell said the plan is to phase in the project in the least disruptive way possible, with sidewalks remaining open until crews started installing the final pavers in front of businesses. Road travel will also be limited among Main Street at times due to utility upgrades along the roadway.

“We’re going to make every effort possible to lessen the impact during construction,” Russell said. “We don’t anticipate any utility services being disconnected for longer than 24 hours for any individual business at any given time throughout construction. Typically, it will be much less than that.”

“We’ll have water and sewer upgrades along the street that will allow for more development,” City Manager Jonathan Russell said. “Since it’s filled out at the ground level, the water and sewer upgrades will allow for residential development on the second, third and fourth stories of the buildings. We’re looking at making some improvements to increase water capacity for fire protection and to be able to handle additional wastewater. Also some additional conduits will be placed for internet connectivity, with fiber being run down for future residential development. There are also some storm water improvements, with enlarging some of the retention basins and the pipes underneath the street.”

Subtracting that figure and the design/bidding costs, which have already been paid, council will also be asked to appropriate approximately $1.8 million from the city’s fund balance Monday night. Currently sitting at approximately $8.7 million, almost half of Washington’s fund balance is restricted, either by state requirement or council policy to keep funds on hand for natural disasters. That leaves about $4.3 million that the council can spend as needed.

In the long run, however, the hope is the downtown investment will pay dividends in the form of higher property values, additional investment in properties and higher sales tax receipts.

“It’s exciting,” Russell said. “It’s been something going on for a number of years. I think communication is going to be key with the public and the business owners to let everybody know what’s going on, what our intentions are and what the end goals are going to be.”

As the Washington City Council prepares to enter the thick of budget season for the upcoming year, the group met... read more