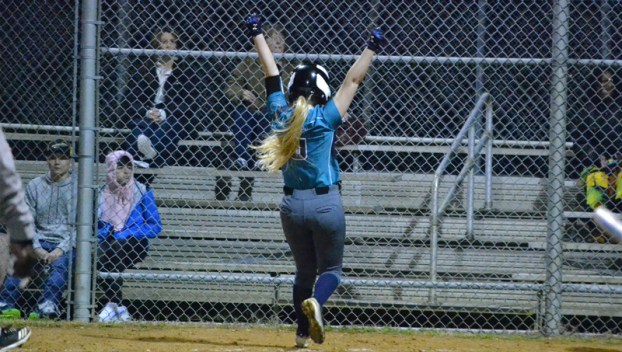 JUBILATION: Southside’s Morgan Dixon reaches for the sky after scoring the walk-off run in the bottom of the fifth inning to give the Lady Seahawks the 11-1 run-rule victory on Wednesday night in Chocowinity. (Mitchell Thomas / Daily News)

CHOCOWINITY — Southside’s softball Seahawks got their season started with a bang on Wednesday night. Behind the pitching of Alexis Whitehurst and a nine-run first inning, the Seahawks notched the win column in its home-opener, 11-1, over North Pitt.

For the seventh year in a row, Southside begins its season with a 1-0 start. The last time they lost a season opener was in 2013 against Washington.

On Wednesday, Southside’s head coach Kam Rouse called the first inning a “tone setter” for the rest of the game.

Whitehurst came out and struck out the first two batters in the contest, and a ground out sent the game to the bottom of the first frame.

Southside’s offense was chomping at the bit to step in the batters box. Morgan Dixon singled, Whitehurst walked and an error scored Dixon. Marah Gottwalt’s double and Moriah Jones’ single cleared the bases for a 4-0 lead.

Talia Askew was hit-by-a-pitch to prolong the first inning, and she came around to score after a steal of second and a couple of passed balls. Jade Mizell doubled on a hard ground ball down the third base line, then Dixon and Whitehurst hit RBI singles before the inning came to a close.

Whitehurst trotted back into the circle with a 9-0 lead, and she took full advantage. She struck out seven North Pitt batters, surrendered only two hits and an unearned run. She hurled a complete game, and nearly clinched a shutout. 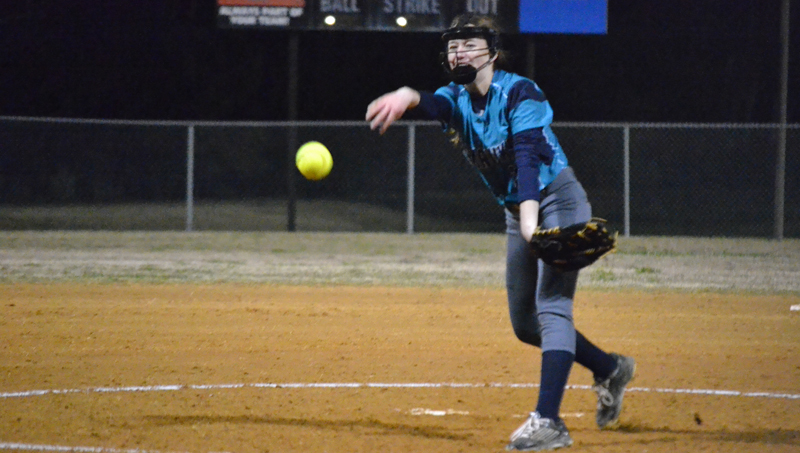 “My fastball on the outside corner and my screw ball (were working for me),” Whitehurst said. “It’s good to start the season with a win. We’re all happy and still learning to work together. Our goal for this season is to make it to the playoffs.”

Rouse was excited for his team’s season opening win, but said they need to be more aggressive at the plate.

“I told them to come out and be aggressive from the start. That first inning set the tone for us,” Rouse said. “Alexis did a good job tonight. She was a little nervous before the game, so I told her, ‘Relax and trust the process of me calling pitches, hit your spots and you’ll be fine.’ We have to be a little more aggressive on the bases and at the plate. We had some decent hits, but we looked at too many strikes.”

Rouse told his team to enjoy the victory, but they have a tough test Monday as they travel to New Bern. First pitch is set for 5 p.m.