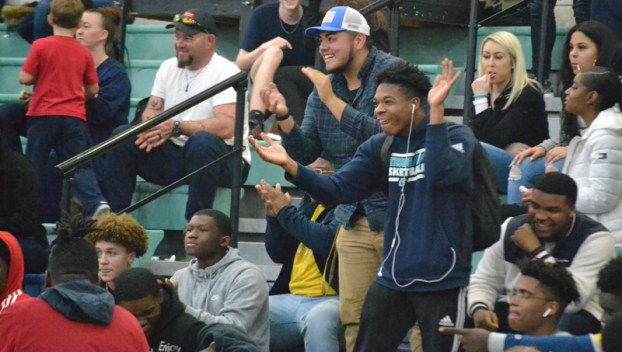 A FINE LINE: Southside’s student section gets excited after a member of the Lady Seahawks basketball team makes a play against Pamlico County earlier this season. (Mitchell Thomas / Daily News)

Keeping fans off the field of play

This past week of high school basketball has been interesting to say the least. There were some phenomenal games being played in the NCHSAA state playoffs, but fans causing a ruckus has overshadowed a couple of them. There’s a fine line between cheering for your squad and going to far. Some fan bases in North Carolina took it a little too far this past week.

The South Granville-Reidsville game and the Henderson Collegiate-Edenton game were both suspended due to fans fighting.

When police tried to grab the sign from the fan, he fell into the Reidsville huddle during a timeout, leading to a Reidsville fan jumping in and a fight ensued thereafter. No players were involved, but it caused the game to be suspended. It wasn’t until a female fan threw a punch at a police officer, that pepper spray was used to halt the fight.

The last 19.1 seconds was forced to be played behind closed doors and not open to the public Thursday evening. South Granville won the game, 72-69, despite Reidsville missing a game tying 3-pointer at the buzzer.

While fans headed to the exits, they walked on portions of the court at the same time, words were exchanged and fists followed. Fights broke out in various parts of the gym, and some of Edenton’s players were thrown into the mix. The game was ended, and both teams left the court without shaking hands.

Basketball is a high-intensity game. Emotions run wild, especially this deep into the playoffs. However, that shouldn’t be an excuse for the amount of fighting that has occurred recently.

The fights take away everything the players accomplished on the court during the game, and make the story about them.

High school athletes work hard to get to this point of their seasons, and for it to be smudged by the fans in the stands is a shame.

We have gotten to a point where kids are playing in dangerous environments, and that’s bad for the game. It’s just high school basketball. There has to be a winner and loser.

How is it possible for the fans to be more affected by the outcome of a game more than the players on the court?

Maybe the fans should take a page out of the players’ playbook, and win or lose with honor. Shake the other team’s hand, and let them handle their business.

It seems players only join into the kerfuffle because they’re defending someone who got them selves involved.

Fans have to be better. Yes, winning is fun, but it should never cross a line of being disrespectful.

Basketball is great, especially here in the state of North Carolina, where the fans are packing out the stands and creating an electric environment for the teams, but self-control is a vital part of it all.

This has to be cleaned up. Come to the game, support your squad, win or lose with pride, and leave without any commotion. It seems to be easier said than done these days, but if it continues, they may close these games to the public.

KINSTON — The Down East Wood Ducks announced Wednesday that they will host a collegiate baseball game between East Carolina... read more