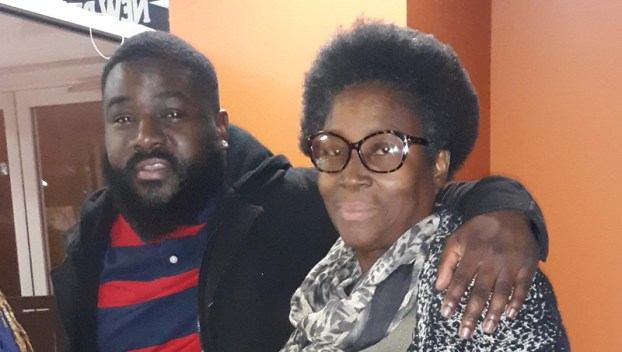 Family tradition, town history, the internet and a heart that beats for the needy are the ingredients that, cooked with love, have become a new local outreach.

God’s Unsheltered Ministry held its first planning meeting Feb. 17 and, with the help of the internet, hosted its first event 10 days later.

Ministry founder Marcus Miller Jr. of Washington was still shaking his head this week, as he told the story of the group’s recent outreach dinner at New Birth Christian Center at 112 Third St., in Washington.

“My dad (pastor Marcus Miller Sr.) was part of the Washington Community Care Coalition when I was about 10 years old. Every year at Thanksgiving and Christmas, we’d give out food boxes to the homeless and needy,” Miller said.

Miller and his dad helped that outreach until his mid-teens.

“Some people would look shocked and ask us who gave us their name, and some would just break down and cry,” he said of that outreach. “Even as we talk here, my mind goes back to when we first started. … I can still ‘see’ it.”

Miller said that, about one month ago, he watched a local merchant tell several homeless men that if they weren’t there to support his business, they had to leave.

A week later, he saw “the same crew” there and, this time, asked if they were hungry. They eagerly accepted his offer of pizza, opened up to him and, eventually, told him about a friend who needed help getting home to her family. Miller, who is 28 and works at IDX Corporation, convinced leaders at a local church to make that happen.

Then he published the story of that church’s mercy on his Facebook page. A week later, he posted that his new “crew” had just told him, “We don’t want you to keep bringing us food … we can’t get to the point that we look for people to do things for us.” Two days after that, Miller’s post was “good morning! I plan on spending time with the homeless guys this week … if you want to come and be a part of it, in-box me.”

That’s also the day he and six friends held a meeting, named the outreach, planned that first event and announced it on a new Facebook page.

Within a week, hundreds of dollars arrived online. That money paid for a full spread from King Chicken and countless bags filled with everything from soap, toothpaste and hand sanitizer to shaving supplies, hygiene products and socks. The event also featured a huge home-baked red velvet cake, a devotional from Miller’s father, a spontaneous drum solo by one of the men who attended and large take-away portions of extra food.

“When it’s meant to be, it will be,” said committee member Brandi Haywood when asked about the speedy success of this first event. “I know that Washington is small, but … there’s more than enough need here (and) room for several types of ministries to serve.”

Miller said the group plans to host similar events every month, adding that anyone interested in participating or donating can contact him by calling 252-214-9312.

Photos of arena polo from Bath Creek Stables, as featured in the latest issue of Washington the Magazine. See a... read more