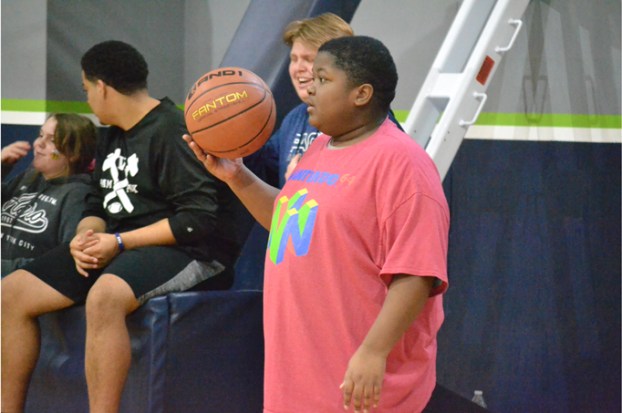 A room full of smiles, face paintings, crafts, bounce houses and a multitude of sports games were played Friday morning during the fourth-annual Winter Carnival for Children with Special Needs at Athletic Edge.

Hundreds of kids from around Beaufort County came out to participate and all of them took part in the activities provided by Athletic Edge. The deejay booth was a hot spot for kids, as they danced along to all the songs that came on, and some even grabbed the microphone to sing their favorites.

The owner of Athletic Edge, Laura Horton, said that it was a great opportunity to give back to the community.

“It’s a beautiful thing. Seeing the smiles on kids’ faces when they walked in the door was special,” Horton said. “The volunteers from Washington High School have been fantastic. They’ve played with the kids and everybody’s had a great time. That’s what it’s all about. I want to thank everybody; the teachers, the students and all the volunteers for coming out and doing such a great job.”

Forty-Five National Honor Society students and athletes from Washington High School came out to assist with the event, and they all expressed the joy they got out of putting smiles on the youngsters faces.

“The best part of it is seeing the kids have a good time,” National Honor Society member, softball player and cheerleader Emme Davis said. “Especially when you see them so focused on an activity that they just lose track of time and a sense of their surroundings.”

Grace Berry, who is also a National Honor Society member and a cheerleader for the Pam Pack said that it’s a good way for the kids to be active.

“There’s not a lot of opportunities like this for them. They’re kind of stuck in their classrooms all day, then they go home. This is a great opportunity for them to socialize and play and act like normal kids, because they are,” Berry said.

According to NHS member and offensive lineman for the Pam Pack Andy Lopez, anybody that wanted to come out to help with the event could if they chose to do so, even if they weren’t an athlete or NHS member, and some volunteers did.

“It’s cool to be able to give these kids an opportunity to do fun things. They didn’t have this type of stuff when I was a kid,” Lopez said. “I’m tired. The little kids have been running around and messing around since I got here at 8:30 this morning. It’s been fun.”

Some of the volunteers looked forward to the Special Olympic games that will take place in late April or early May at Washington High School, so they can volunteer there as well.

Since the early part of November, basketball and wrestling have filled gyms throughout Beaufort County and beyond. There have been... read more