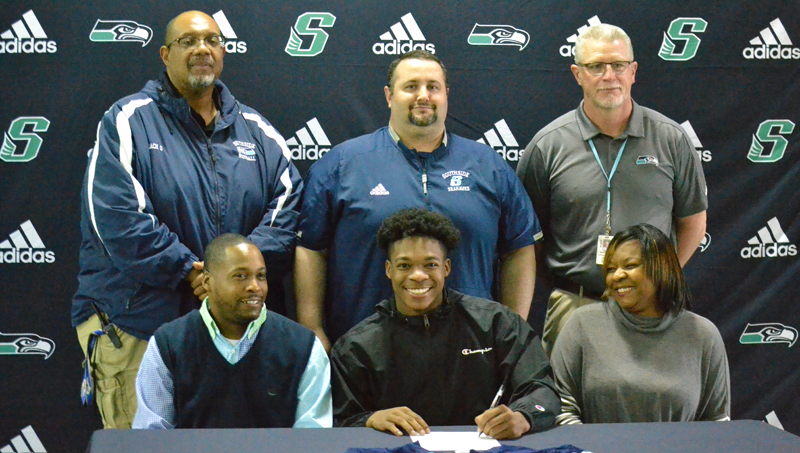 INKED: Southside’s Jamari Nelson (bottom middle) smiles as he puts pen to paper, signing to play his collegiate football at Chowan University next fall with his parents Greg Nelson (bottom left) and Kenya Nelson (bottom right) by his side. His coaches (top left to right) Andrea Quinerly, Jeff Carrow and Principal Rick Anderson were also present for his signing. (Mitchell Thomas / Daily News)

It takes hard work, dedication and passion to play football at the next level. Southside’s Jamari Nelson is a prime example of that, and he will be playing college football for Chowan University next fall after signing with the Hawks on Monday afternoon.

The 6-foot-1 linebacker and running back was a wrecking ball for the Seahawks last season. Nelson’s speed helped him get to the edge and create separation in the open field, leading to plenty of scoring touches on the ground and through the air throughout his career. Defensively, Nelson always had his nose around the football at the end of each play.

Nelson had a couple of 100-plus yard performances this past season, including a 119-yard game with a touchdown against North Duplin. 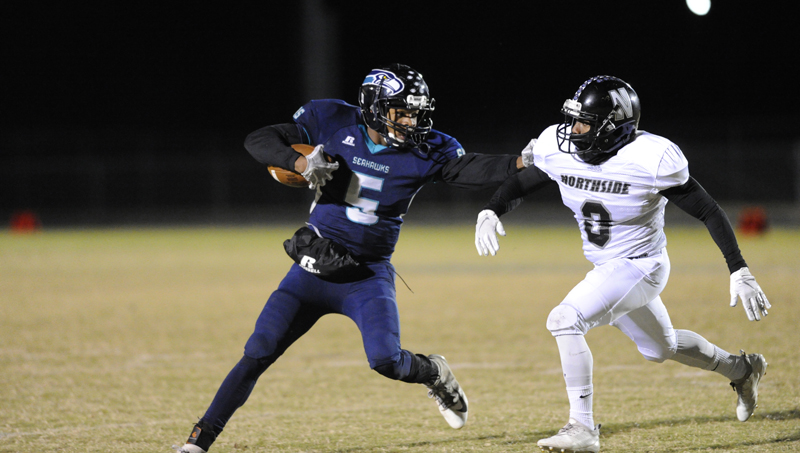 STIFF ARM: Southside’s Jamari Nelson refuses to be taken down during the Anchor Bowl this past season. (Ashley Vansant / Daily News)

Nelson was ecstatic about his opportunity to play college ball.

“It’s very exciting. I’ve been waiting on this moment my whole life, you know? I’ve been working so hard. I’ve put in many late nights and early mornings and just trying to make myself better every day,” Nelson said. “I am going to get in the weight room to get stronger, faster and work on my technique because I’ll be moving to a new position.”
Nelson said his coaches at Chowan want to move him to boundary safety. Which is a spot of the field that provides support to a boundary corner, playing over the top pass defense and assists on any vertical release from a third receiver on the field side.

“I’m very comfortable with (my coaching staff at Chowan),” Nelson said. “They treated me just like I was one of their own from the first time I stepped on campus. I fell in love with the place. They work out with you, and that made me a lot more comfortable, especially after talking to some of the players there. It was a real cool atmosphere.”
The head coach of the Seahawks, Jeff Carrow, said Nelson has the ability to go to Chowan and start from day one.

“He’s a high-quality, high-character kid. He’s a good kid, hometown kid with a great family that raised him up the right way. He’s a hard-working football player whether it was offense or defense,” Carrow said. “I think he can go out there and be a starter from day one for them. The coaches there are high on him and from what they’ve seen out of him. He gets to join two guys in Hunter Tyler and Christian Brinkley that just went there last year. It was a great choice for him.”

Carrow said that Nelson would embrace any type of position change and that he would thrive in it.

“You know, in high school we put them where we need them. But, he’s got the body type to play in the secondary at the college level without a doubt. He’ll embrace it, it’ll be a new challenge for him and it’ll be a great thing.”

While Nelson is wrapping up his senior year at Southside, he said he looks forward to getting his college football career started in Murfreesboro this fall.