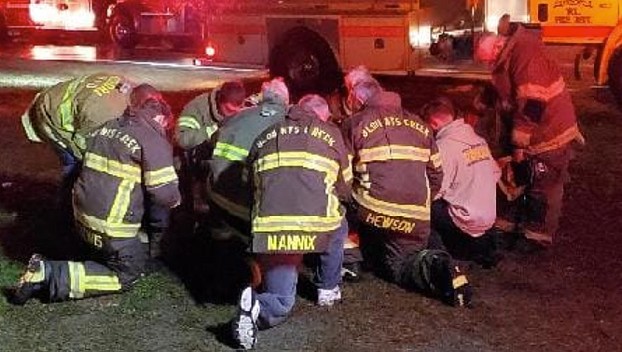 GRANTSBORO — Grantsboro-Silverhill Volunteer Firefighter Maegan Speciale remains in critical condition this week, as support and prayers from around the country lift her and her family up in their time of need.

Speciale was severely injured last Thursday night while responding to a structure fire on N.C. Highway 306 alongside departments from Beaufort County. Speciale was providing traffic control for the incident when a vehicle struck her, according to Pamlico County Emergency Services.

In the days since the accident, Pamlico County Emergency Services Director/Fire Marshal Chris Murray says the community has rallied together to support Speciale, with encouragement and prayers coming in from all across the United States.

“The outpouring of support has been unreal,” Murray said. “I’ve even had folks from way out in other states reach out to us.”

Locally, fellow first responders have also taken action to help, from establishing fundraisers to putting together a special gift for Speciale, all under the label of “Maegan Strong.”

One example is a fundraiser to support Speciale’s family while she is in the hospital, an hour away from home. That GoFundMe fundraiser, established the day after the accident, had raised $6,125 as of Tuesday afternoon, with a total goal of $7,500.

The fundraiser was established by fellow first responder Amanda Heath, with another firefighter, Eric Kindle, listed as the beneficiary. The funds will be deposited into a non-profit bank account “Maegan Strong.” That fundraiser can be accessed at www.gofundme.com/f/please-help-maegan-and-her-family.

Information for the local bank handling that fundraising is yet to be announced, according to Pamlico County Emergency Services.

Another project in the works is the creation of a quilt for Speciale, incorporating patches and T-shirts from various fire departments. These can be sent to the Pamlico County Fire Marshal’s Office at 202 Main St., Bayboro, NC 28515, Attn: Maegan Strong.

“On behalf of the Grantsboro-Silverhill Fire Department, the biggest support that is needed at this moment is the thoughts and prayers of the people of this great state and nation for Maegan and her family,” read a Tuesday release from Pamlico County Emergency Services. “Fire department personnel are standing watch at Vidant Medical Center and will continue to do so as long as needed. We again would like to thank all the agencies and citizens that have reached out and will continue to reach out until Maegan comes home.”

Prayers, thoughts and financial support aside, Murray said that there is a clear message to come from this accident — slow down and move over when approaching emergency vehicles.

“Slow down. Stop if you’re unsure of what’s going on and follow instructions,” Murray said. “From the response side, we’re evaluating our policies and procedures. It may be something where we shut the whole road down. It may inconvenience people, but it’s somebody’s life at stake there.”

As of Tuesday, no charges have been filed in the accident, which remains under investigation by the North Carolina State Highway Patrol. A final decision on charges will come after consultation between the NCSHP and the district attorney’s office.