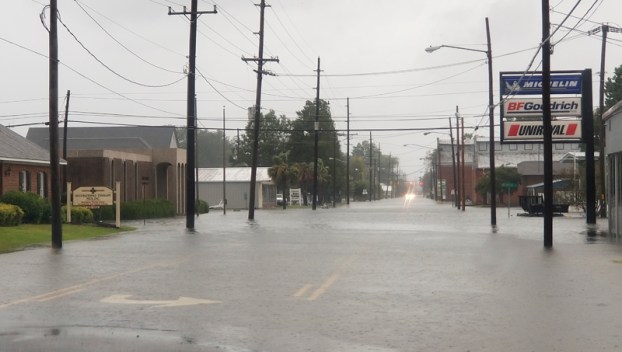 NEW HOME COMING: Displaced by flooding during Hurricane Florence in 2018, the Washington Police Department is one step closer to a new home, as the design phase for a new station kicked off Wednesday. (Matt Debnam/Daily News)

City looks at function and form of new police station

For more than a decade, building a new home for the Washington Police Department has been hovering on the radar for city government. Wednesday afternoon, that longstanding vision came another step closer to reality as city officials and architects sat down to discuss particulars of what the WPD needs to protect Washington residents.

The meeting marked the kickoff of an 8 1/2-month design phase to create plans to then be bid out for construction. If all goes according to plan, city officials are anticipating a possible move-in date in late 2021 or early 2022. The design phase will be overseen by Moseley Architects, a firm with 50 years in business and more than 70 completed public safety projects between Virginia and North Carolina.

The site for the new station will be a 3.57-acre city block bound by Bridge, Van Norden, West Third and West Second streets. The city bought the site, formerly home to a Dr. Pepper bottling plant, for $800,000 this past November.

Since 2018, when the former police station on West Third Street was flooded during Hurricane Florence, the Washington PD has been temporarily housed in a rented space on John Small Avenue. For Washington Police and Fire Services Director Stacy Drakeford, the kick off of the new design phase is an encouraging sign. 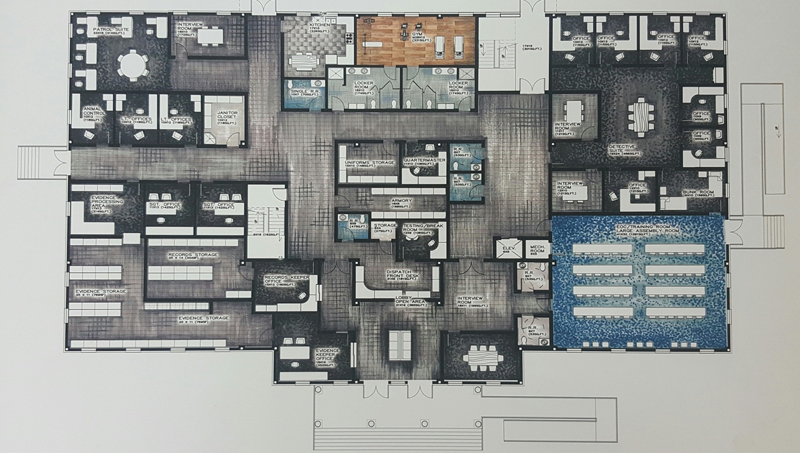 EVERYTHING IN ONE: With some minor tweaks, Washington Police and Fire Services Director Stacy Drakeford says a set of floor plans drawn up by East Carolina University students a few years back will meet his department’s needs for years to come. (City of Washington) 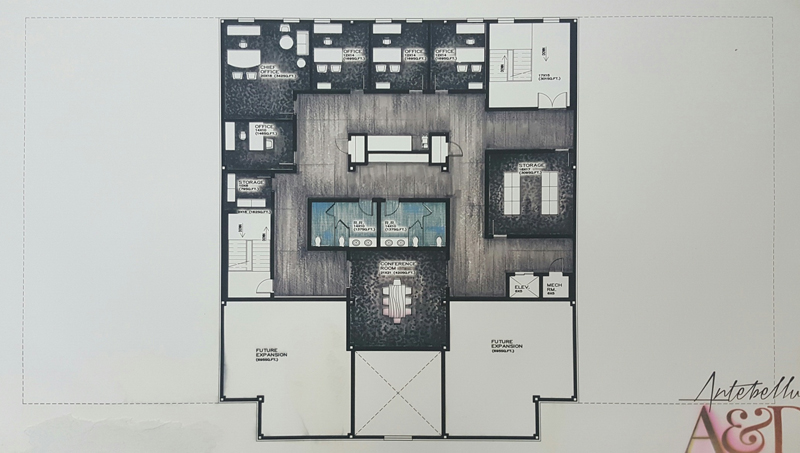 At the heart of Wednesday’s discussion was a set of floor plans drawn up a few years ago by East Carolina University students visiting Washington.

“It’s fantastic (to have these plans),” Moseley Architect Josh Bennett said. “It’s already got the chief in the mindset of looking at a floor plan and thinking about how he’s going to operate so as we continue to bring options to the table, he has a starting point of reference.”

Depicting a two-story building, the designs include separate spaces for patrol and investigative divisions, an emergency operations center/meeting room, evidence storage, a communications hub and locker rooms on the first floor. Offices for command staff and storage space would occupy the second floor, though Drakeford said he would be open to a single-story building as well.

City Manager Jonathan Russell added that the structure would need to blend well with the surrounding historic district in its architecture, avoiding an overly “institutional look.” Washington Mayor Mac Hodges also expressed the importance of communicating the plan with the public and giving opportunities for public feedback.

Washington Fire Marshal Mark Yates advised good communication between city staff and the architects to make sure the building is easy to maintain. Yates noted that maintenance at Washington’s Fire Station Two has become an issue, though the station is only a little more than 11 years old.

Finally, Drakeford said his main goal for the new station is simply to have a facility that can serve Washington residents in the best way possible. While the plans examined Wednesday will undoubtedly be tweaked during the design process, he said the plans presented would serve the department’s needs for years to come.

“It should serve our needs now and for the future,” Drakeford said.

While the exact cost of the project will on depend bids received from contractors, a recent presentation to the Washington City Council estimated the projected cost at approximately $3.4 million.

Between a dedicated savings account and funding tied to Hurricane Florence recovery, there’s already a healthy nest egg for the new police station.

Currently, the city has already set aside more than $1.6 million specifically for the project. An estimated $250,000 in FEMA funding will also aid construction, and Russell says the City is seeking additional funds through USDA and Golden LEAF grants. The remainder will be paid for through a 30-year USDA loan.

“All the grant dollars we can receive will lessen the impact for the citizens and allow us to build a good, quality building,” Russell said. “We’re just excited to see it move forward. It’s been in the works for a number of years and it will be a great addition to the corridor coming into the city and will really be a showpiece for the community.”

A $3.4 million revamp of Washington’s Main Street is slated to begin in less than a month, following a 4-0... read more