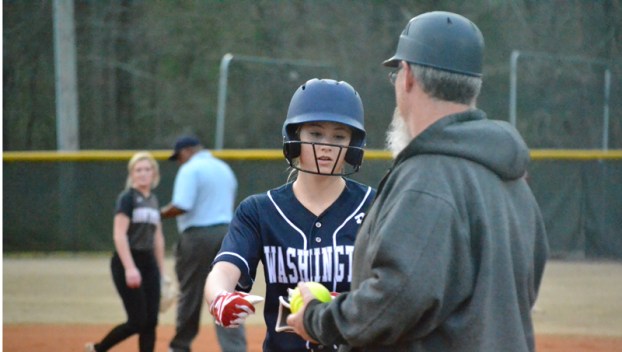 The Lady Panthers got plenty of runners on base, but couldn’t cash in against the pitching of Abbi Tucker and the tough defense that plays behind her Tuesday evening. Washington’s Laci Campbell smashed her first-career home run over the right field fence in the Pam Pack’s 7-0 victory.

The game was tied at 0-0 until the top of the third inning. Grace Paszt started off the inning with a bloop single over the shortstop’s head, and she came around to score after a single from Campbell, and Tucker chased her home with a sacrifice fly to center field.

All was quiet again until the fifth. Ava Mizell and Paszt got things started with back-to-back singles, Tucker reached on an error, scoring Mizell. Then, senior slugger Kaylee Elks roped a double to the fence to score Paszt for a second time in the contest. 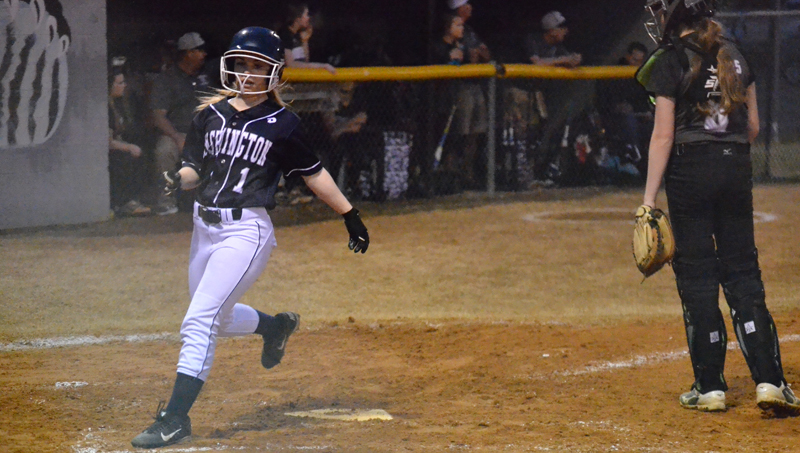 Campbell led off the top of the seventh, and she crushed the first pitch of the at-bat over the wall.

“It was a perfect pitch — right down the middle,” Campbell said. “It felt really good. I’ve been hitting them over in practice, but not in a game yet, so I was really excited. We lost a lot of hitters last year, so we have to make up for it a little bit, but I think we can do it. We do have to communicate a little better, but I think we’re getting there.”

Kathleen Slade went 2-for-3 with a couple of singles, Hannah Baker smoked a double to right-center field, while Cameron Rose and Madison Braddy singled. However, Northside left 11 base runners stranded in the contest. 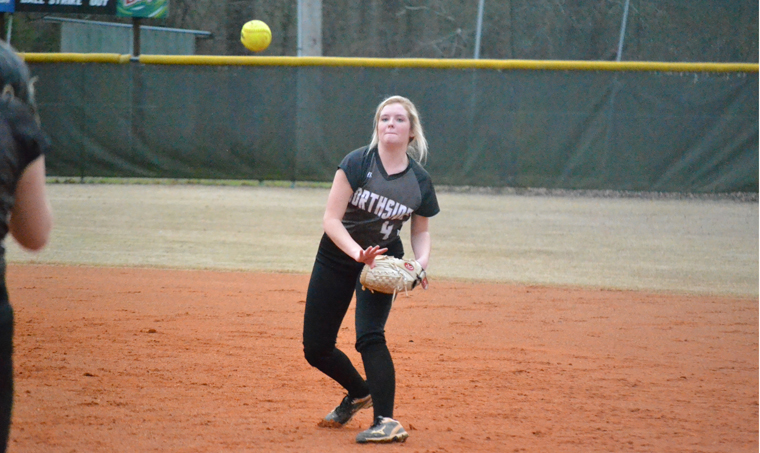 CLOSE CALL: Northside’s Taylor Chase scoops up a ball and tosses it to first during the Panthers’ game against the Pam Pack on Tuesday night. (Mitchell Thomas / Daily News)

Braddy started in the circle for the Panthers, and she was hit in the ankle after a come backer to the mound, but she got back up, dusted herself off and finished the game.

Pam Pack assistant coach Brad Horton, who was filling in for Doug Whitehead for the evening, said that it took a team effort to get the job done.

“Abbi has done really well, she’s really starting to come along and hit her spots. The key for this team is playing together as a unit. What got us in the game was small ball. Slap hitting, bunting, that kind of brings everybody together and then the long ball comes in and takes care of the rest,” Horton said. “All it takes is getting a bat on the ball and seeing what happens. The team is coming together really well. I’ll tell you what, though, for (Braddy) to take a shot in the ankle like that and finish the game shows her toughness. She’s a great kid and great pitcher. I’d love to face her all the time. Northside has a great team over there.”

Tucker tossed a complete game with six strikeouts, only allowing five hits and no runs.

The Pam Pack were back in action Wednesday night, and will open up conference play Friday at Kinston.

Many Beaufort County basketball players impressed us this past season with their talents on the court. From freshmen to seniors,... read more