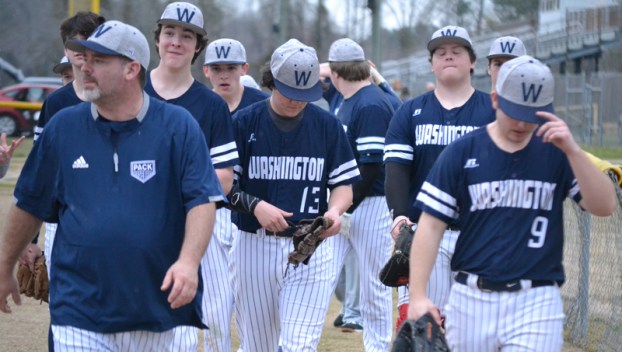 LEADING THE PACK: Washington’s head coach Lane Raper (left) leads his team back to the dugout after the team’s pregame prayer. Raper got his first win as head coach of the Pam Pack on Tuesday night in a 4-0 victory over Northside. (Mitchell Thomas / Daily News)

It was a hard-fought battle between cross-county rivals Tuesday night in Pinetown. The Pam Pack baseball team used the lights out pitching of Mason Weaver to secure first-year head coach Lane Raper’s first victory, in 4-0 fashion.

The junior, Weaver, pitched a complete game, one-hit shutout. The Pam Pack’s offense was exactly firing on all cylinders, but it pushed a few runs across to give Weaver a comfortable cushion.

“My fastball was mainly working for me, but I have a good defense behind me, too,” Weaver said about his one-hit shutout performance. “Offensively, we’re taking way too many pitches. We keep getting behind in the count, but I bet if we start swinging more in the beginning of the at-bats we’ll start hitting it more.” 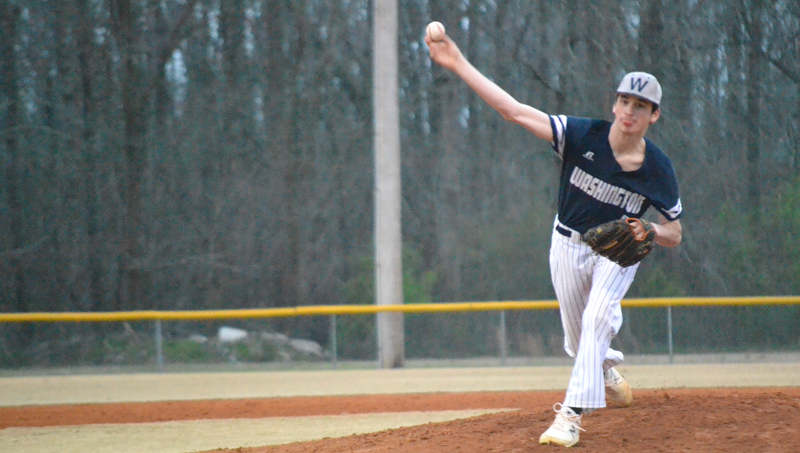 Tyler Rowe was the spark plug for the Pam Pack offense, as he was the only batter in the contest with two hits. He reached three times with two singles and walk, scoring two runs. Weaver and Will Crisp scored the other two runs for the Pam Pack.

“It’s exciting. I’m glad we finally got the monkey off our back and got the first win behind us. We have Conley coming in and that’s going to be a tough one for us,” Raper said after his first win as head coach. “Mason carried the team on his back and took them to the win tonight. He’ll be on a couple weeks rest after tonight. We have to improve our communication between the players and I, though. We have to have better situational at-bats, as well.”

Northside had its chances, but they couldn’t quite put anything together. Cameron Craig had the lone hit for the Panthers, a single up the middle, and he reached again on a walk, as did Tyler Modlin.

The Panthers drop to 1-1 on the season, but have two games remaining this week against North Edgecombe and Friday night against Ayden-Grifton. First pitch is slated for 6:30 p.m. Friday night.

Washington plays Conley this evening, and they open up 2-A Eastern Carolina Conference play on Friday night at Kinston.

The Lady Panthers got plenty of runners on base, but couldn’t cash in against the pitching of Abbi Tucker and... read more