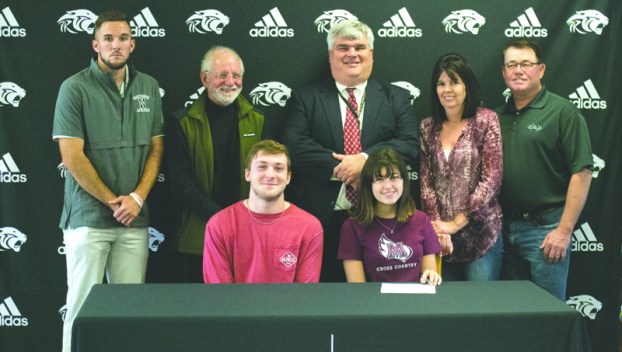 PINETOWN — Only the mentally tough can survive a 5-kilometer race in the blistering heat of late summer. Sarah Beth Boyd did that for four years of her Northside High School career. She signed to run cross-country at Meredith College on Thursday morning in the Panthers’ media center.

Cross-country isn’t an easy sport to succeed at. It takes a lot of time and effort to get into running shape, and maintaining that conditioning is just as difficult.

Boyd said she was excited about the opportunity to run at the college level.
“I am really excited, but I’m also a little bit nervous because it’s going to be a lot different than running here. For one thing there’s going to be a lot more people running and it’ll be more competitive. The distance is a little different, too. In high school it’s 5 (kilometers) but in college it’s a 6K,” Boyd said. “(I need to improve on) not getting in my head too much. I do worse when I think about how good or bad I’m doing, and when I don’t think about it I run better.”

Boyd has spoken plenty with Meredith’s cross-country coaches Field Miller and Demonica Stanley, and she said she was very comfortable with them moving forward.

Boyd’s best time of her senior season was a 25:38, and said she looks to improve on that as she begins her running career in college.

Boyd was a member of the track team in year’s prior, but she opted not to participate this year.

Head coach Bob Girani said that no matter what, Boyd would work hard throughout her time at Meredith College.

“Her best attribute is her personality. She’s committed, she’ll work hard, and she’s her own worst critic, which can be a good thing as long as she doesn’t overload herself,” Girani said. “I think her stamina would need some work, but a college program will fix that.”

Meredith College is located just outside of University Park in Raleigh, a couple of miles away from the North Carolina State campus.